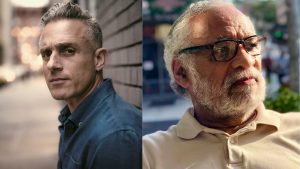 Miguel Luciano is a multimedia visual artist whose work explores themes of history, popular culture, social justice and migration via sculpture, painting and socially engaged public art projects. His work has been exhibited widely and is featured in the permanent collections of The Smithsonian American Art Museum, The Brooklyn Museum, El Museo del Barrio, the Newark Museum, and the Museo de Arte de Puerto Rico. Luciano is a faculty member at Yale University School of Art and The School of Visual Arts in NY. He is currently an Artist in Residence in the Metropolitan Museum of Art’s Civic Practice Partnership Residency Program.
Website: https://www.miguelluciano.com/

Hiram Maristany is a photographer born and raised in El Barrio (East Harlem), New York. He came of age in the 1960s, when young New York–born Puerto Ricans were asserting a new cultural-political identity inspired by the Cuban Revolution, the Chicago Young Lords, and the civil rights and Black Power movements. Maristany was one of the earliest members of the New York chapter of the Young Lords Party and became its official photographer, capturing some of its most iconic moments. His work is featured in the permanent collections of the Smithsonian American Art Museum, The National Museum of African American History and Culture, and El Museo del Barrio.
Website: https://americanart.si.edu/artist/hiram-maristany-31147

Free and open to the public.