In response to a the police objecting to a book to be read by children at MacArthur School, a rally was called for Saturday April 24th at Rec Park. The Black Children Matter campaign previously spoke at a School Board meeting. The book is “Something Happened in Our Town” and the Binghamton Police asked that it be pulled from the curriculum and subsequently the School Board released an apology “for the negative light this has shined on their profession.”

The rally featured a powerful speech by Shanel Boyce about how racism has made Black women into fighters just to survive, and punctuated by the real girls and women who were killed by state violence. About 200 people were at the rally which then 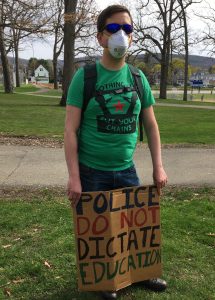 The full statement from the School Board is here, courtesy of WBNG.com:

The Binghamton City School District prides itself on its diverse school community. We were made aware of recent posts on social media and have received several phone calls that expressed concern about the use of a read-aloud book at the elementary level for book of the month titled, “Something Happened in Our Town,” by Marianne Celano, Marietta Collins and Ann Hazzard. The publisher’s suggested audience for the book is ages 4 to 8. The book is about the experiences and perspectives of two children growing up in the same town and attending the same school, in the same classroom. One child is black, the other is white and the book develops a rich dialogue about how these children and their families see the world around them from the perspective of race.

The book reflects a national topic that is current and impacts many of our students and their families. While the book includes conversation around racial bias and injustice against African Americans, the concepts are focused on the importance of treating everyone fairly. As the book shares, “there are many cops, black and white, who make good choices.” The dialogue following the reading of this book draws awareness to bias, emphasizing that it is not okay to judge people based on their race, what they look and sound like, or the role they play in the community.

In an effort to teach about tolerance, the book was shared with students in small reading groups. Teachers were provided the necessary resources to handle the important questions and dialogue that may arise after reading the book. The intent behind the use of the book was to promote inclusion and anti-racism.

We support and respect the brave police officers that protect our community. In no way does this book represent our thinking or beliefs about our police. It is unfortunate when any profession is portrayed negatively. We apologize for the negative light this has shined on their profession and commitment to our safety. The Binghamton City School District has embraced School Resource Officers, each whom have served as outstanding role models for our students. We are proud of the relationships they and other officers have developed with our students and the school community.