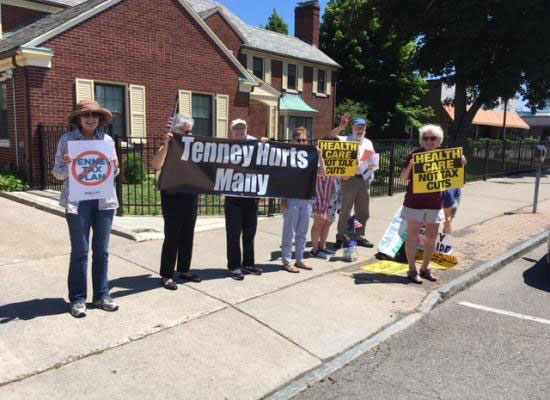 Voted to repeal some of the Dodd-Frank Act, that was put in place after the economic collapse during President GW Bush. It demanded that large banks separate their investment side from the protected banking side. It was put in place to keep banks from making crazy bets on stocks and bonds, putting the bank at risk, while being protected by taxpayers.

Voted to allow “expansion of private care for veterans” which means moving towards the dismantling of the V.A., which is loved by the vets, and they deserve better than any money saving options.

Voted to table articles of impeachment against the President. President Trump is out of control in so many ways, but she voted “with him” more than 97% of the time.

Voted for the “tax reform” which was a big giveaway to big businesses, but not to normal humans.

The middle class now pays more tax than ever while millionaires (like her), and corporations, pay less.

Voted against ozone standards (air pollution) in favor of big business and not our environment.

Voted to allow employers to give time off rather than pay overtime to employees.

Voted to repeal a law that stopped internet companies from selling or sharing private data like individual internet searches, for profit.

Voted to remove anti-trust law from insurance companies, so that companies can do more of what they want to customers, and to lessen protections for people like us.

Voted to repeal environmental protection of streams from coal mining companies, putting the profits in front of sensible water and land protections previously in place.

Voted to repeal the standing rules to let James Mattis become Secretary of Defense, even though he had not met the requirements, putting the desires of our president in front of long standing rules to protect us all from any conflicts of interest.

Voted to allow veterans deemed mentally incompetent to keep their guns unless a judge’s written order is obtained.

Voted to repeal Obama-care, and push tens of millions of Americans out of health care.

Voted to defund Planned Parenthood, which provides health care to many Americans who would not get it anywhere else. Federal money does not pay for abortions, but she voted to destroy Planned Parenthood because they do also provide legal abortion services as well, to some of their clients.

Voted (as a NY State Senator) to NOT raise the minimum wage for NY employees.

When President Trump said that those not standing and clapping for him during his State of the Union speech were “un-American”. Americans do have freedom of speech, but Claudia Tenney said:

“I would say it was un-American, and they don’t love our country.”

When Claudia Tenney was discussing the shooting at Parkland in Florida, where 17 students and teachers died, she said that most mass shooters in America were “Democrats”, she was asked follow up questions and said:

“Obviously, there’s a lot of politics in it. And it’s interesting that so many of these people that commit the mass murders end up being Democrats, but we don’t want to, the media doesn’t talk about that either.”

Her claim about Democrats is totally unsubstantiated, which means she made it up because she thought it might sound good to her audience. When pressed on TV about this she said:

There is apparently never any time to talk about sensible gun control measures with Ms. Tenney. She has an “A” rating from the NRA, and she seems completely opposed to all steps on controlling access to assault rifles, or universal background checks, that most Americans seem to think is necessary.

As a candidate, Claudia Tenney has accepted $46,529.00 from the National Rifle Association for her bids to be elected. Do you think that she listens to “us” – or to the NRA? How much did you contribute to her, and does she take your calls? Americans want sensible gun laws, not more of the same, nor one more mindless “thoughts and prayers” comment.

Finally, Claudia Tenney does not have any real town hall meetings with her constituents. She’s afraid to be called out for her outrageous voting.Her few live events require RSVP’s which have been called (rightly) as fake town hall events since she invites only her supporters. This March she had a “telephone town hall” meeting, but that too was an invite only event. That way she gets only her supporters, not the general public, to tell her that she was wrong on many of the issues.