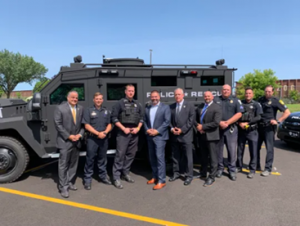 As continuous rallies show, Broome County residents have joined the national movement to defund bloated police and incarceration budgets. Local commercial media are now rushing to respond, broadcasting on how impossible it is to lower police funding. This morning WBNG reports that while police budgets are a significant share of local municipality budgets, little change can be expected. Why? “None of the municipal leaders interviewed for this story outright supported the idea.”

Johnson City’s Mayor said his police department is already frugal, while Binghamton’s Mayor Richard David declaimed that no changes in the budget could be made. Broome County Executive Jason Garner told WBNG that “the county sheriff’s office’s budget has remained stable over the past few years and accounts for a low percentage of the overall budget.” Endicott Mayor Jackson was blunter: “They’re taking away our guns, and now they’re taking away our police”!

City and county budgets can be confusing. Yet a little investigation would help here. Funding under Mayor David for the largest police force, the Binghamton Police Department (BPD), has been increasing year after year despite falling crime rates. 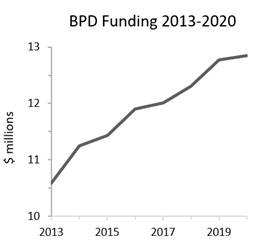 Take the largest budget: the Sheriff’s budget of $40 million. Can any of that be cut? Is it all necessary? The largest proportion is for the jail, which was expanded in 2015, despite community protests, at a cost of $7 million. It is designed and staffed to incarcerate 600 persons. Last month it held 277 persons. Expenses are out of control: $30 million annually for a jail at half capacity, housing only 27 convicted persons, and still budgeted for $2.5 million of overtime pay?

And contrary to County Executive Garnar’s claims, funding has not been “stable.” Far from it. Every year Garnar has added new officers, highlighting five new officers in his 2020 budget announcement alone. As detailed here earlier, the jail budget has rapidly increased in every budget Garnar has proposed and the legislature has approved. It’s a longstanding trend under both Democratic and Republican County Executives in the mass incarceration era.

Dig a little deeper into distant capital and other budget lines and you find more suspect $ millions. Does the Sheriff really need $250,000 this year, almost every year, for new vehicles? Do the City of Binghamton and the Sheriff really need multiple armored personnel carriers? To do what? These are weapons of war. Has anyone counted the pension costs for hundreds of surplus jail officers? Should we continue to spend well over $1 million a year on cops in schools across the county, rather than on teachers and counselors?

In sum, the claims of our elected officials don’t hold up. We have bloated incarceration and policing budgets. Its time for a change.