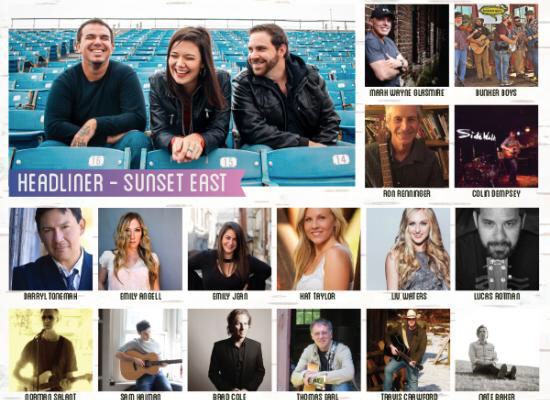 Roscoe (8/1/2018); With school budget cuts all over the state and after school programs reduction or elimination, it has become more urgent to help keep the music in the lives of children through other programs. For the second year in a row, the Roscoe Beer Company continues to raise funds through the Reel Harmony Songwriters Festival and fundraising efforts to help pave the way for local youth participation in music enrichment programs such as the E3: Engage-experience-explore arts program, which is a school-based program that brings high caliber performance art educational groups to schools and the community.

This years’ Reel Harmony Songwriter Festival will take place on Saturday, August 18th, 2018 at the Roscoe Beer Co which is located at 145 Rockland Road in Roscoe, NY. It will feature original performances by 17 musical acts consisting of original singers and songwriters coming from as far as Arlington, TX starting at 12pm. Headlining this years’ festival is Sunset East, a band from Tennessee who won the voting content with their song “I’ll Get Along”. The group was founded in 2016 and is influenced by artists such as The Eagles, Ed Sheeran, Dave Matthews Band, Maroon 5 and The Black Keys, Sunset East is quickly making a name for itself in Nashville with its unique style and soul touching lyrics of folk and the feel good style of pop. Sunset East will be taking the stage at 7:30pm. During the day of the event, performances will be happening all over the brewery grounds with jam sessions inside the brewery, as well as, the beer garden and on their very own Stage Bus. Check out www.reelharmonyfestival.com for more information about all of their great performers. Local food, beverage and craft vendors will be camped on the grounds selling a variety of different merchandise alongside the musical performers. The grand finale to this years festival will be fireworks and so much more.

The Reel Harmony fundraiser took place a month earlier in the Roscoe Beer Company’s Beer Garden on July 19th, 2018. The five course dinner and beer pairing proceeds along with sponsorship for the upcoming festival on August 18th will enable students from the Roscoe community to have access to top shelf programs that have the potential to make a significant impact in an area of their lives where their passion truly lies. One of the programs that gets funded by this event, is the E3 program which extends Bethel Woods’ reach throughout the school community, supports learning, and inspires artists, by framing programs through the lens of Common Core Standards and school goals. E3 provides an accessible way for schools to integrate cultural programming. The design allows the program to reach over a third of school aged children in Sullivan County over the course of three weeks, and creates a memorable connection for them and their families.

During the inaugural fundraiser last year, the festival organizers’ Phil and Donna Vallone were able to present a check for $5,000.00 to Bethel Woods Center for the Arts to benefit youth music and art programs for Roscoe, Livingston Manor and other Sullivan County youth. It is amazing the impact the fundraiser can have on students of the arts. “Reel Harmony will make a REAL difference. Roscoe Beer Company and the Vallones have offered a once in a lifetime opportunity to eight students in Roscoe and Livingston Manor to be part of the E3 MIC Program at Bethel Woods. This amazing opportunity is precisely what our future needs; young adults who are well rounded, culturally minded people who have a deep and abiding respect for diversity,” says Suzzane Morris of Bethel Woods.

Phil Vallone remarked that he was thrilled with the amount of people that came out to support both events last year, “The inaugural Roscoe Singer Songwriter was a huge success! The performances were top notch, the schedule ran right on time and the enjoyment from the attendees was obvious! The rooms in town were full, restaurants were busy, and the gas stations were pumping gas. We raised money for our local kids to attend programs at Bethel Woods and enhance the music programs in the local schools. In the end it was all about the singer and the song – and it benefitted our community and enjoyed by visitors to our town!”

Come and join into this spectacular music festival right in the heart of the Catskill Mountains – “Catch the Vibe” on August 18th, 2018 in Roscoe, NY from 12-9pm and keep the music alive in the hearts of our children.