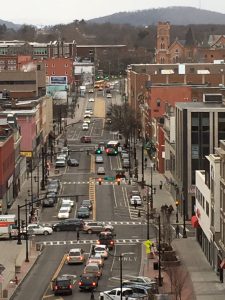 When Judy heard the loud pops outside she assumed it was fireworks so popular at end of term parties. When she looked out from her State St. apartment a very different scene materialized. Presumably drunken students had scattered recycling all over the street and the popping noise was cars running over bottles and cans. The annual Pub Crawl, which has bled into a several day affair, was the worst in memory, according to several downtown residents.

When Judy, who is 75, tried to clean up the some of the debris someone told her the entire length of State St was in a similar condition, except, for some reason, the front of Social on State. A young man, obviously inebriated, tore down the barriers protecting a 9 foot deep construction hole creating a dangerous situation for car drivers who could not see it or even pedestrians stumbling around or rough housing. Judy put the barrier back in place with the help of two students.

There were other reports of many students, male and female, urinating in the streets in broad daylight. In previous years students on the were observed going behind buildings to relieve themselves, but this year a female student was observed squatting down in front of Taco Garage to pee. This was not an isolated incident. Many downtown residents complained about drunken students urinating on buildings or on sidewalks.

It is also common during this traditional drunkfest to see people so inebriated that they can’t stand or are vomiting in the streets. All of these situations have also been observed during events such as Martini Walk and other downtown attractions that center alcohol as an activity. Even without the popping of recyclables there are always a blanket of red cups and other detritus on sidewalks left for building owners to clean up.

It is by now almost mandatory to acknowledge that Binghamton University is the major economic driver in our area. But do we have to be grateful for obnoxious and dangerous antics of drunken students? Universities state that they are “in loco parentis”, which is a Latin phrase for “in place of” or “acting as parents” for their students while they at the university. Where were those “acting” parents this past weekend? What provision are they making for their students safety? How long will it be before someone dies or gets seriously ill from alcohol poisoning, or any of the other things that can happen to stumbling drunks?

If Binghamton University has any responsibility for the welfare of its students does not that include teaching them about the dangers of alcohol and other addictive drugs? Or basic civic behavior? Or structuring these events to be less harmful?

It also begs the question of what the City of Binghamton’s responsibility is for public health and safety? Could the City not require Porta-Johns along the route of such events? Would not extra police on the streets be prudent?

The police were not present when students were throwing garbage off the top of the large building of student housing on the corner of Henry and State Streets or any of the other locations mentioned here. But they were certainly upset when they were ordered to clean up the aftermath on State St. Video cameras are in operation downtown in aid of crime prevention and investigations. Was no one watching them?

If the City has a responsibility to keep its citizens safe surely that includes requiring simple sanitation at events. Anticipating public events such as the Pub Crawl and deploying a visible police presence is not too much to ask. Or, if we tackle this as a community, could we not organize relevant professionals and volunteers to monitor, educate, and prevent the worst of this bad behavior? Perhaps that would be an idea for re-structuring the police?