As we all face a global health crisis, we want you to know that we are going to face this together. There have been a lot of community members, groups and businesses stepping up to make sure that we are all taken care of. Thank you! I am blown away how we are all coming together. Below is information regarding mutual aid donation needs, pick up and drop of locations for peoples immediate needs.

If you need immediate assistance please call 211 or 1-800-901-2180 and someone should be able to help you. Here is a meal schedule from Broome and Tioga Counties and Local Restaurants offering FREE meals to school children.

Drop off location is at the Citizen Action office on 477 State street in Binghamton ( behind th CVS). 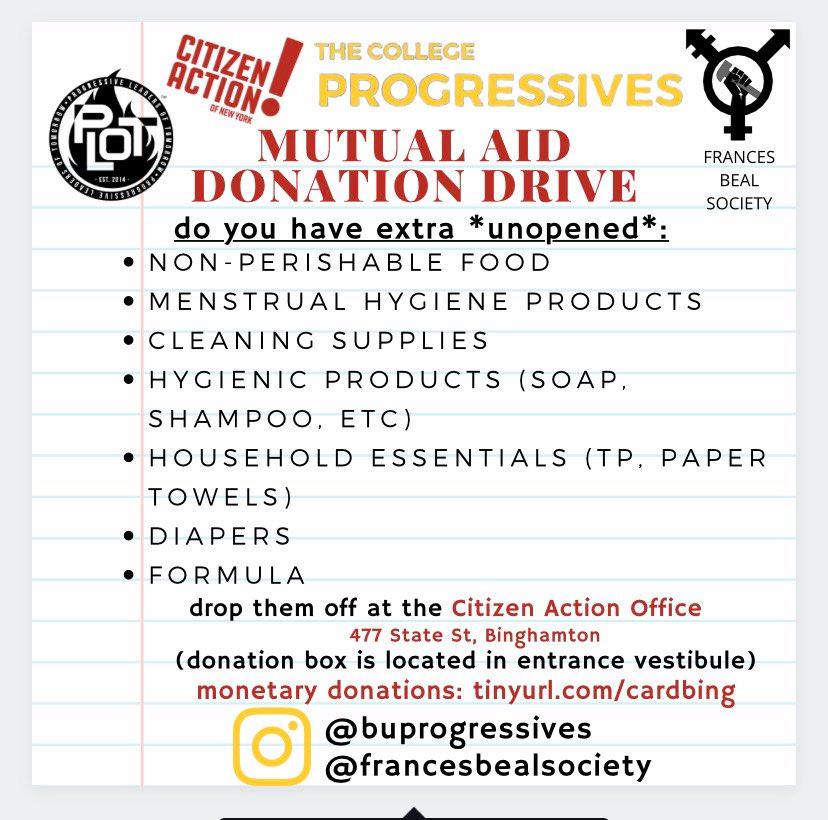 1) We Need a Stimulus Package that #Protects all People – Not just Corporations. & Stops GOP

Today federal lawmakers are debating a third stimulus package. We must drive messages to lawmakers and the public that the relief package must help all people — not just be a slush fund for the corporations.

“Hello, my name is —– from —— [zip code]. I’m calling to thank you for standing strong. Please put people first before corporations as you consider relief options. We need direct cash assistance, permanent paid sick leave, expanded unemployment insurance, student debt forgiveness, and immigrant inclusion in all programs. No corporate bailout without restrictions. Make sure the Medicaid Maintenance of Effort is maintained so Governor Coumo cannot cut Medicaid at this critical time. He needs to take the Federal Medicaid dollars and abandon his proposed cuts to Medicaid in the New York budget.”

The coronavirus crisis has held a harsh spotlight on the fact that our country fails to adequately protect working people. Urge Congress to expand #PaidSickDays and #PaidLeave in the emergency response to #COVID19! #AJustStimulus

Thousands of people have been taking action remotely, and it has made a huge difference. We won a statewide freeze on evictions and mortgage payments for New Yorkers’ economic impacts of the COVID-19 outbreak, but we’re still fighting to suspend rent. We know that housing instability and homelessness leads to worse health outcomes. While addressing this public health crisis, Governor Cuomo and legislative leaders need to do everything possible to protect our most most vulnerable. Italy has already taken this precaution. It’s only right that tenants be granted the same protections as homeowners. Add your name here to call on Governor Cuomo to go all the way and freeze rent, mortgage and utility payments. 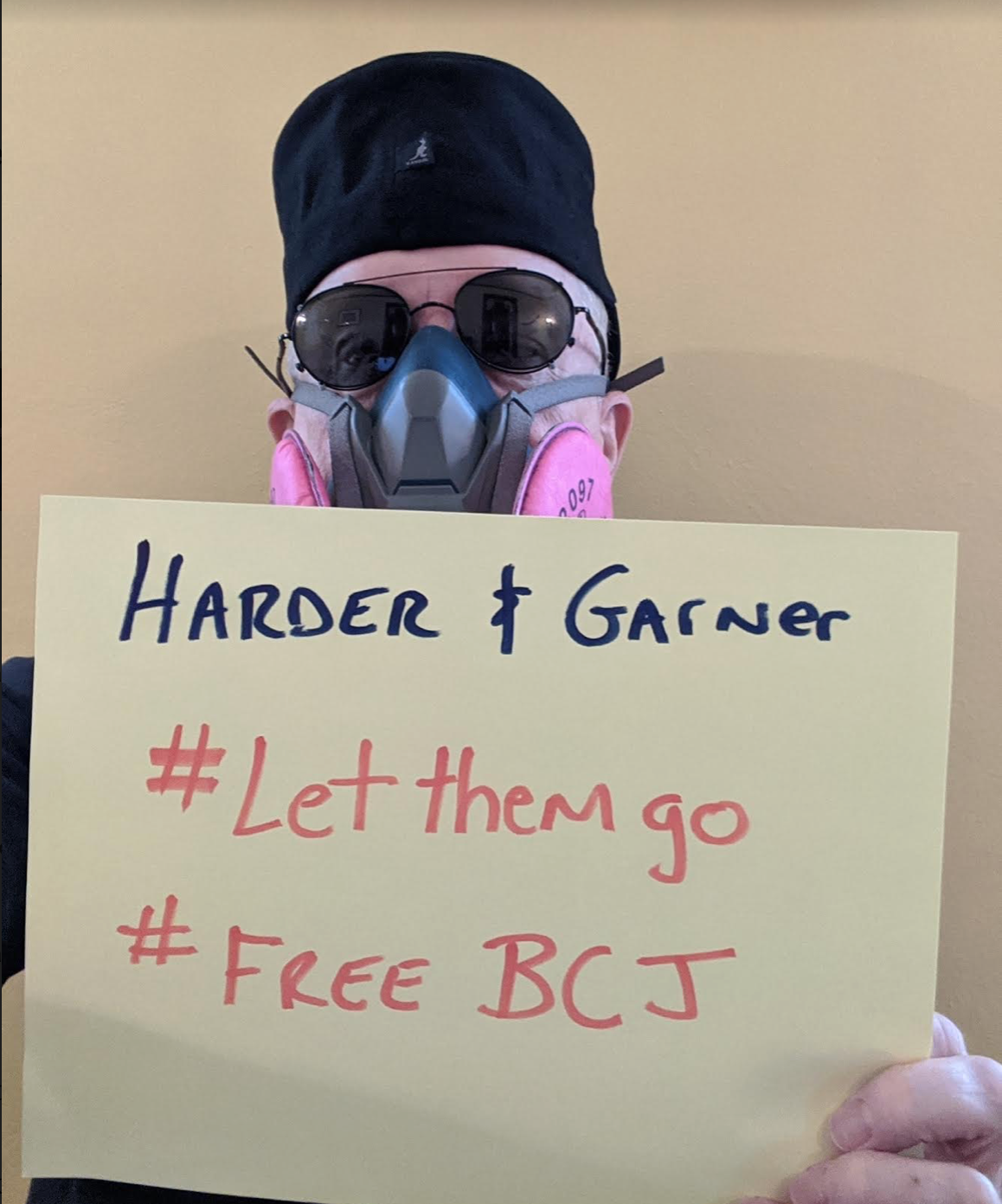 incarceration in the current pandemic. In Broome County, however, the Sheriff continues to operate the police and CO academy and is failing to provide incarcerated people and his own workers with appropriate protective measures. Like all local jails, the BC jail holds people with who are, on average, much sicker, having conditions like asthma, diabetes and hypertension at greater rates. This means that incarcerated people people them at higher risk even on the outside.

JUST—unlike the local political elites—has a plan, and its simple: LET THEM GO! Once released they should be rehoused safely, in now unused motels or hotels are a good place to start (these are much better than homeless shelters where people are often in dormitories). See the full list of demands below.

We are asking everyone who has a Twitter/Instagram account, or has the means to email or text us photos, to do the following: 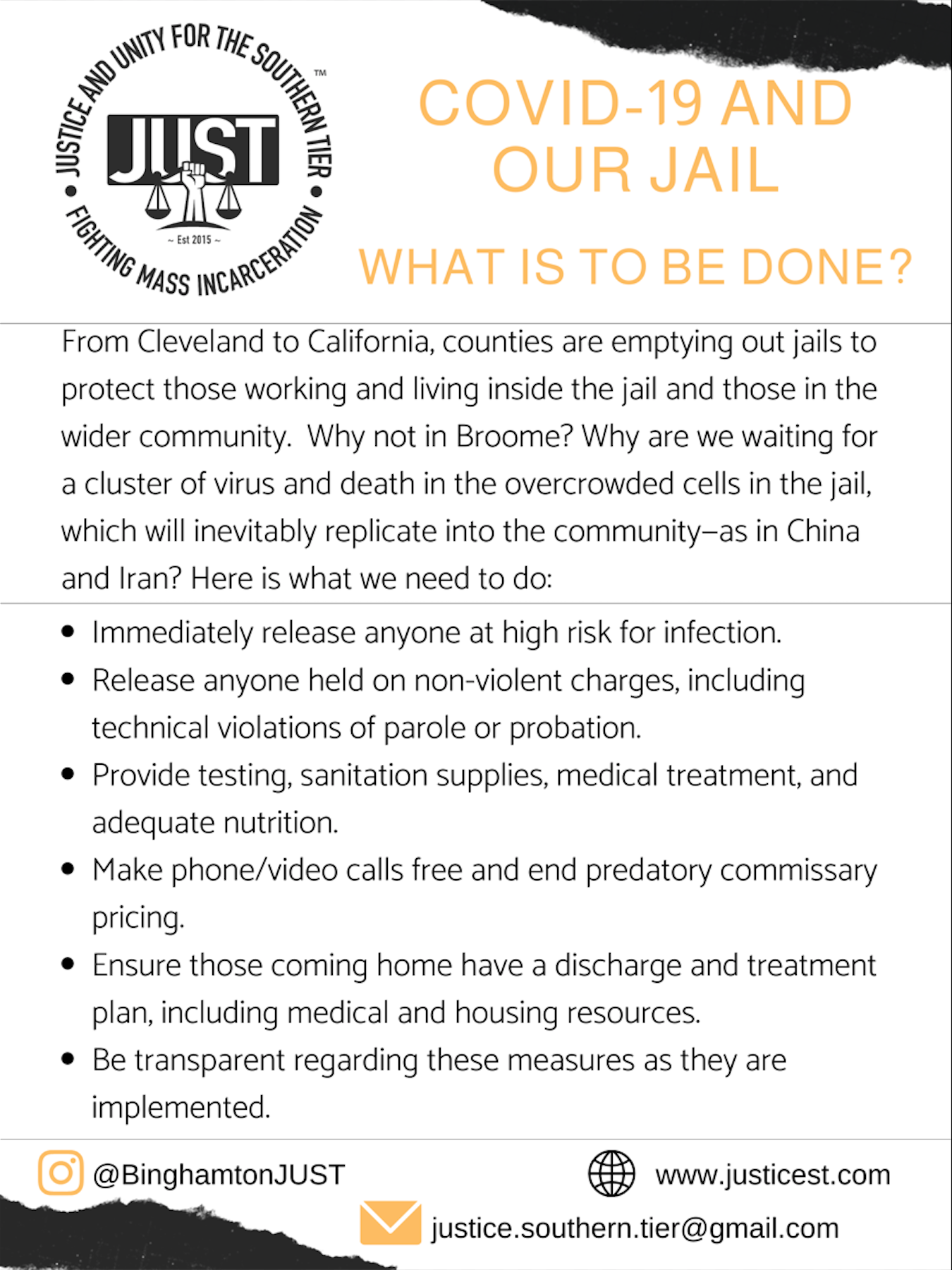 Contributions to Citizen Action of New York are not tax deductible as charitable contributions for federal income tax purposes.