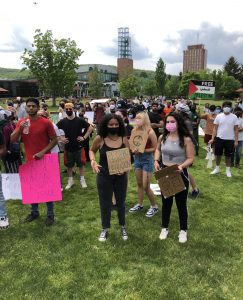 In less than 48 hours a coalition of Binghamton University students organized a rally in support of Palestinian Solidarity that swelled to over 250 people. The speakers not only spoke of the ongoing barbarism of the Israeli state but also the ongoing complicity of the United States. Several speakers pointed out the recent cracks in challenging the Zionist narrative paying particular attention to the role of Black Lives Matter has played in expanding our world consciousness.
A group of Zionist students gathered several yards away but other than isolated catcalls & gestures remained contained & isolated. As a veteran of over 40 years of pro Palestinian solidarity in the Binghamton area, this in itself was remarkable. 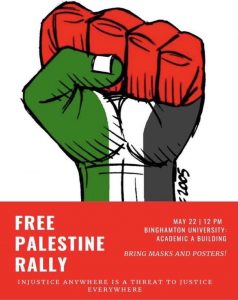 Cracks aside, this has not diminished the bipartisan consensus of the US government in
their unending financial & military assistance. Crocodile tears, prayers & assorted symbolic
gestures by the chief purveyors of violence worldwide will not be tolerated by the growing
solidarity movement. Several Jewish speakers spoke of their transformational moments of understanding the stark contrast between Zionism & Judaism.
At the conclusion the names of the 63 dead were read out in a moment of silence. This was slightly interrupted by the aforementioned Zionist students. The rally remained peaceful & nonviolent throughout. Afterwards several participants expressed pity for the Zionists’ understanding that their
entire education & upbringing were bathed in Zionist propaganda that needs to be addressed & countered.
A lesson from all social change movements throughout history. In the words of the great IF Stone;’ you lose, you lose,you lose, you win!’