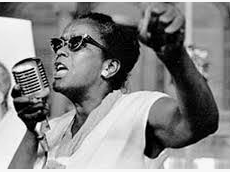 She believed that in order to be effective organizers in a community, activists had to form relationships, build trust, and engage in a democratic process of decision making together with community members.   The goal was to politicize the community and empower ordinary people. She condemned elitism and was a coalition builder.

In the half century of activism Baker defied orthodoxy and traditional political categories; she was in the m

oment, a teacher by example. Howard  Zinn, a white anti-racist professor at Spellman College described Baker as “one of the most consequential and yet one of the least honored people in America.” When Zinn published SNCC:The New Abolitionists, the first account of the organization’s development, he dedicated the book to Baker. “She was more responsible than any other single individual for the formation of the new abolitionists (SNCC, Student Nonviolent Coordinating Committee) as an organized group in the early 1960s. She, Zinn and MLKing were adult advisors, but she “did the organizing work.”   She had travelled for years in many Southern states f

or the NAACP and the SCLC (Southern Christian Leadership Conference). She would leave these organizations when they were “too accommodating or reticent” to risk their funding or community positions. In 1959 she was fed up with white vigilante violence toward Blacks. Believing in non-violence she struggled with but accepted a Black person’s right to defend himself.

One situation arose in 1962 in Monroe, NC where there had been a suspicious drowning of a black teen volunteer Raymond Johnson. Baker went to “investigate” because she knew the mother Azalea Johnson was a friend of white civil rights worker Dorothy Dawson of Texas. Baker’s meeting with Johnson, a homegrown writer and politician, was revealing for understanding the local politics. Also memorable were the black men sitting in the front room and on the front porch with loaded pistols at their sides. The situation in Monroe was that volatile.

The Freedom Rides were begun in 1961 by the Congress of Racial Equality (CORE). After several freedom riders were hospitalized after a bloody melee in Anniston, AL, and fearing the next attack might be fatal, CORE called off the rides. Brazen SNCC member activists immediately intervened to continue the Rides. In the summer there were activist meetings at the Highlander Folk School in Monteagle, TN with conflict over ‘direct action’ vs ‘voter registration.’ In the end Baker helped forge a combined effort to go forth.

Lewis served as the chairman of the Student Nonviolent Coordinating Committee (SNCC) from 1963 to 1966. In 1961, Lewis became one of the 13 original Freedom Riders.[3][18] There were seven whites and six blacks who were determined to ride from Washington, D.C. to New Orleans in an integrated fashion. At that time, several southern states continued to enforce laws prohibiting black and white riders from sitting next to each other on public transportation. The Freedom Ride, originated by the Fellowship of Reconciliation and revived by James Farmer and the Congress of Racial Equality (CORE), was initiated to pressure the federal government to enforce the Supreme Court decision in Boynton v. Virginia (1960) that declared segregated interstate bus travel to be unconstitutional.