On June 12, Governor Cuomo issued an Executive Order requiring each local government in the state, with a paid police department, to adopt a policing reform plan by April 1, 2021.

On June 15, Mayor David was quick to respond, explaining to Bob Joseph on WNBF that a coalition will soon be named to start reviewing police policies and procedures in compliance with Governor Cuomo’s Executive Order.

Five months later, however, there have been no meetings. Mayor David hasn’t even named a single person to the panel. And I know of at least 10 folks (including me) who emailed his office with an interest to serve back in June and July, per the Mayor’s own directions, and not one of us ever got even a courtesy response.

Mayor David’s inexcusable delays have turned this entire process into a farce. There is absolutely no chance to have a meaningful, inclusive discussion about community safety reforms and still meet the deadline of April 1.

Consider the suggested timeline that is in the excellent and informative 139-page Guidance Booklet the Governor’s Office issued in August to support the approximately 500 local jurisdictions impacted by his Executive Order.

Suggested timeline for local jurisdictions who are required to develop and submit to the state by April 1, 2021, their local Police Reform Plan. This timeline is included in the Guidance Booklet prepared by the state and released in August 2020 to support local efforts.

We are closing in on December with the holidays quickly approaching, and Binghamton Mayor Rich David hasn’t even named the members of the panel.

If we start at the deadline of April 1 and work backwards, it’s clear the panel has no chance to develop anything of substance that reflects genuine engagement with the very real concerns about the status quo approach when it comes to community safety.

Two, or even three, months to meet with diverse stakeholders to have difficult but necessary conversations about substantive reforms to a policing system that is inflexible and stubborn to change is both a joke and a shame.

Consider some of the suggested items included in the Guidance Booklet that all local police reform panels should discuss: 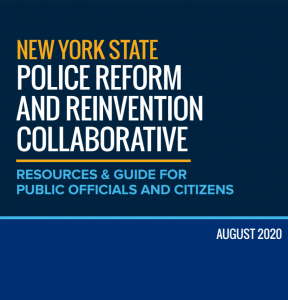 A quick google scan shows that his counterparts took this challenge far more seriously. Many other municipalities are already well into the process, both small and big communities. Buffalo Mayor Byron Brown announced police reform panel appointments in early September. Mayor Walsh in Syracuse has been active on this issue since taking office in 2018, and in October even announced a dedicated website to the City’s efforts to reform policing to increase transperancy and accountability when it comes to monitoring progress. Utica Mayor Robert Palmieri announed his police reform panel appointments at the end of August.

the north star, the valedictorian, providing guidance to all others. Mayor Kathy Sheehan’s police reform panel has been meeting since August, the website includes member bios, calendar of events, recordings of virtual meetings and presentations, and more.

Schenectady’s police reform panel announced nine (virtual) community meetings between October 21 and November 12 as part of its commitment to inclusion and listening.

Even smaller or similarly-sized communities like Watervliet, Cohoes, Peekskill, Poughkeepsie are all weeks or months ahead of Binghamton.

Rather than trying to pretend that the panel can take this challenge seriously in such a short period of time, Mayor David should appeal to the Governor for an extension. He could say “we’d rather get this right than meet some arbitrary deadline.” September 1, 2021 seems about right.

Because without the extension, this is already a failure. Everything between now and April 1 will be theater.

Maybe that was the point all along.