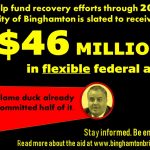 Binghamton received the first half of the unprecedented federal recovery award, $23 of $46 million, this summer. According to the 8/16 City Council Work Session Packet, Mayor David has already programmed every penny. And aside from a last-minute, face-saving announcement of $6 million for affordable housing, not a single penny is being allocated to help … END_OF_DOCUMENT_TOKEN_TO_BE_REPLACED 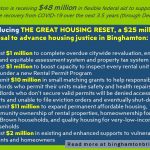 As reported previously here at The Bridge, Binghamton is in line for $48 million in flexible federal aid to support recovery efforts as we emerge from the crushing impacts and trauma wrought by the pandemic. The first $24 million is expected by May 10, and the second half will be wired by the US Treasury around May 2022. The deadline to spend funds is … END_OF_DOCUMENT_TOKEN_TO_BE_REPLACED

Local leaders all over the country—Republican and Democrats—are elated by the eye-popping federal aid awards included in Biden’s $1.9 trillion American Rescue Plan. As reported previously here at The Bridge, the City of Binghamton is slated to receive about $48 million, and the Town of Union is in line for $32 million. The U.S. Treasury is required to … END_OF_DOCUMENT_TOKEN_TO_BE_REPLACED

Back in 2009 and 2010, as local governments started to drown in the wreckage of the Great Recession, Washington didn’t even bother to show up to lend a hand. Our federal leaders from both parties were too busy shoveling tax dollars to the very same Wall Street firms that imploded our economy and ultimately wiped-out billions in household wealth, with Black … END_OF_DOCUMENT_TOKEN_TO_BE_REPLACED

BINGHAMTON - In November 2019, a multi-million dollar transaction in student rental housing on Binghamton’s west side went completely unnoticed and unreported. Over three days that month, Stonebridge Property Group (SPG), a private equity firm from New York City, acquired 34 Binghamton properties—33 residential properties on the west side in the “college … END_OF_DOCUMENT_TOKEN_TO_BE_REPLACED

In an April 28, 2017 Press and Sun Bulletin article about Mayor David's real estate holdings and potential conflicts of interest, the reporter noted that Rich David made a promise not to purchase any properties while serving as Mayor. "While he's mayor, though, he will not purchase any commercial properties, he said in a March interview, a nod to questions … END_OF_DOCUMENT_TOKEN_TO_BE_REPLACED

On June 12, Governor Cuomo issued an Executive Order requiring each local government in the state, with a paid police department, to adopt a policing reform plan by April 1, 2021. On June 15, Mayor David was quick to respond, explaining to Bob Joseph on WNBF that a coalition will soon be named to start reviewing police policies and procedures in … END_OF_DOCUMENT_TOKEN_TO_BE_REPLACED

When announcing Binghamton's 2020 street improvement plan earlier this year, Mayor David promised the multi-million dollar investments would benefit all users and all abilities. “Focusing on Complete Streets principles and ADA-compliant infrastructure ensures all residents have safe access regardless of age or ability,” said Mayor David in his media … END_OF_DOCUMENT_TOKEN_TO_BE_REPLACED

The overall impacts from COVID-19 will likely cause significant harm to governmental finances at the local, county, and state levels. Officials at all levels have been warning that the loss of sales tax receipts, casino proceeds, income taxes, and property tax payments could create staggering budget shortfalls. Federal aid, they argue, is the only way to … END_OF_DOCUMENT_TOKEN_TO_BE_REPLACED

Earlier this week, a small coalition of housing justice advocates in Broome County announced a new paid opportunity for residents that are passionate about expanding safe, healthy, affordable housing choices in the area. The group, the Steering Committee of the emerging Broome Community Land Trust (CLT), is now seeking applications for its first-ever … END_OF_DOCUMENT_TOKEN_TO_BE_REPLACED