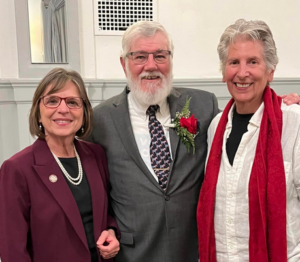 Peg Johnston and Marty Doorey both were given the Mayor John J. Burns Award on October 13th. Doorey is a lifelong Democrat activist known for canvassing for candidates all over the Southern Tier. Johnston is the founding director and now co-owner of Southern Tier Women’s Health Services, our local abortion clinic. She is also active in the Dept of Public Art, the Cooperative Gallery, VINES gardens, and has been an editor of the binghamton bridge since it has gone online in 2007.

Her speech to the City of Binghamton Democratic Committee is as follows, with some approved editing:

I’m going to make us a little uncomfortable. Just a little.

Here are some words that probably made some of us uncomfortable in the past several years:

Abortion. (OK, you were ready for that one.)

When we were organizing our rape crisis center in 1981,  a woman said to us, “Can’t you focus on something more positive?”

And, as emerging lesbians, our joke was “Lesbian, the word that kills.” (Don’t tell your father, it would kill him.”)

We trip over pronouns, (“they is not grammatically correct!”) but many of us feel a deep unease over the changing cultural definitions of gender.

These words have our discomfort in common. If my work has taught me anything it is the power of listening. We are uncomfortable because we don’t understand, or our beliefs about life get in our way. I remember listening to a black friend telling how many times in a day—a day!– she had endured racist remarks! What would that assault on your identity do to you? How would you feel if you were alienated from your own body? Or, not believed? How would that change if someone really listened to you?

Obviously, my area of expertise comes from listening to thousands of women and their families about their very personal decision to end a pregnancy. These folks have overcome negative attitudes about abortion because their lives and the lives of their children–present or future—are everything to them. Their courage is palpable and it has been my great privilege to witness their stories. Not all of these decisions were difficult. Some people know right away that they are not ready for a –or another– child. But the ones who found it difficult usually found it hard because of the stigma attached to abortion.

Just to review, stigma is a mark—stigmata is a word many of you know. If you feel stigmatized, you think: someone would think “less of me if they knew.” We focus on the person who feels stigmatized, but often enough we neglect to name those who stigmatize. Anti abortion activism is an extremely well funded, well organized campaign that has been in high gear for more than 50 years. They are masterful at manipulating language and casting fear among us. This political campaign includes the protestors outside my office. It includes several large denominations of religions. It includes some millionaires. It includes senators, presidents, politicians of every kind.

And, sorry to say, it includes all of us.

Silence is just as stigmatizing as being called a murderer by some nut in a parking lot. And let’s face it, we have all failed to speak out about abortion at one time or another. “Don’t bring it up—they’re Catholic.”  “Let’s not be divisive.” “Don’t ruin Thanksgiving dinner.” Or, “I just don’t have the energy to get into it.”

Our discomfort with this and other topics is holding us back politically. Because we can’t talk about abortion, we have been playing defense for the past 50 years. It is completely obvious by now, abortion is the ultimate “wedge issue.” And we gave it to them. Instead of saying “Abortion is normal”, “Abortion is Moral”, “Everyone Knows Someone who has had an Abortion”, or hey, just saying the word “Abortion,” we have remained silent, or used euphemisms like pro choice or reproductive rights. Anti-abortion folks say the word seven times more than we do! And, how many politicians like Herschel Walker have paid for abortions? Abortion is political not moral to them.

This is an inflection point in history. We have an opportunity to take a crash course in abortion conversation, in difficult conversations. We can really listen to people’s experience of living in this imperfect society.

The Supreme Court took away our right to our bodies and people’s rage over that is bubbling up everywhere. If we can set aside our pre-conceived beliefs and prejudices, and just listen to the stories of others in this big tent of ours, we can unite around human rights and be unafraid of any of these words that are being used against us.

We just have to meet the issue head on, listen carefully, and say the damned word.