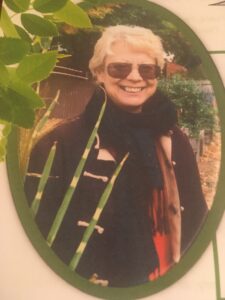 Peggy Benz, long time community activist, died recently, and friends attended a “Potluck for Peggy Benz” as a remembrance on Saturday the 22rd of October. Peggy had a great impact in many Binghamton endeavors. She was a volunteer in VINES gardens, especially Mather St. Community Garden. She initiated street clean ups in the NoMa area and was involved with NoMa’s early efforts to improve the North of Main neighborhood. Peggy also was a promoter of bringing people together to solve problems and discuss solutions.

Several people remarked that “she had more ideas for improving Binghamton in one week than most people have in a year.” Peggy was fond of walking the streets of Binghamton and sometimes helping a resident make a garden. She was not above “guerilla gardening” either!

Before her retirement, Benz taught pre-school and was involved in child development. She volunteered as a mentor at Horace Mann School.

She is survived by three daughters, their partners  and six beloved grandchildren. And many admirers.