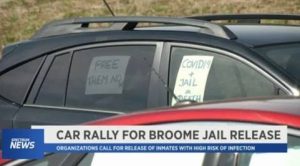 March 25 2020 Yesterday Broome County Executive Jason Garnar approved death sentences for scores of Broome County residents. There is no other way to state it. In an interview with Bob Joseph on WNBF radio, he insisted he would not approve any releases from the Broome County jail. He refused to answer any real questions: has anyone in the jail, guards or inmates been tested? Are there any cases of coronavirus there? He would not say.

Sheriffs, District Attorneys, and County Executives from Cleveland to California, from Texas to New Jersey and Brooklyn, are releasing thousands of persons for good reasons. Jails are deadly for those inside them, guards and prisoners alike. As we have seen in China, Iran, and Italy, it is perfectly predictable that coronavirus clusters incubate in crowded cells and then spread into surrounding towns. Releasing persons is sound public health policy, a necessary measure to prevent death inside and outside jails and prisons.

Broome County is no exception. Who is incarcerated? It’s not dangerous local criminals. Broome’s jail houses 346 persons, including 29 under federal and state custody (held only to make money for the county). Of the 346, only 89 are sentenced—and for minor crimes since persons convicted of serious crimes go to state prisons. The simple truth is that almost all persons in the jail are innocent, awaiting trial, or charged with misdemeanors. At last public count only 6 percent of those arrested in the county were arrested for violent felonies.

It is impossible to protect those living and working in the jail from the virus. Sheriff Harder brazenly postured for the press yesterday, stating that the jail was the safest place to be. Even a child can figure out that following even the most basic rules to prevent infection is simply impossible. Self-distance yourself from others in a crowded pod or a double-bunked cell? Use tissues when you cough or sneeze, when there is no ready tissue supply? Wash your hands when you have been given 4 ounces of liquid soap a week for all bathing and hand washing? Isolate yourself when you are in a dormitory with bunk beds and shared and unclean bathrooms, toilets, showers? Wash your hands with alcohol-based hand sanitizer when none exists since it is contraband? Cover your mouth when you cough when your hands and feet are shackled while in transport of because of security status? Eat food prepared by forced labor in a distant, unsterile, unsupervised kitchen?

These are the ghastly conditions under which we keep poor local residents, from women and men suffering from terminal illnesses, to youth who are parole violators due to smoking marijuana, to a majority of the incarcerated suffering from substance use disorders, disabilities, and health problems. The incarcerated and the workers who move among them are, quite simply, under a coronavirus death watch.

It need not be so: Broome needs to follow the example of other countries and radically reduce the jail population.

Justice and Unity for the Southern Tier is running a social media campaign to force elected officials, the District Attorney, and local judges to release as many persons as soon as possible–and provide the resources for them to self-isolate in the community. Link to the campaign here. And for more news, head to the JUST webpage.