What would you do if someone gave you an unexpected $37 million? A once-in-a-lifetime bonanza?

That was the delicious dilemma faced by the Broome County Executive and Legislators when the Federal American Rescue Plan Act (ARPA) was passed in March 2021. ARPA allocated $350 billion to municipal, county, state, and tribal governments to assist in COVID recovery. COVID had eliminated jobs, impoverished families, overwhelmed public health services, and destabilized the mental and physical health of youth, adults, and seniors alike. ARPA monies were intended to address the public health, economic, housing needs arising from the epidemic. ARPA guidelines for spending were flexible, but emphasized prioritizing vulnerable groups and equitable economic recovery (Federal guidelines are here).

How did Broome County spend the money? We don’t know. Neither the press nor county government has provided a list or tabulation of funded projects. When the local Press and Sun-Bulletin newspaper reported on the use of $163 million in ARPA funds across the Southern Tier, Broome County had only one, unspecified commitment mentioned.

Binghamton’s $46 million in ARPA: where did it go? 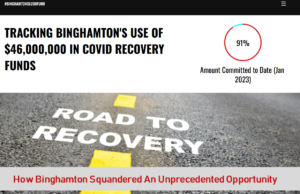 The City of Binghamton was no clearer on how it was spending its $46 million.  Like the county, the city did not hold any community public hearings, get public input, or provide any transparent accounting. Thanks to investigations by community activists we now have the details on a new website, #bingamtonslushfund, which tracks the city government’s ARPA decisions.

It’s not a pretty picture. The group’s conclusion: ARPA dollars were recklessly laundered into a slush fund controlled by the Republican mayor and city council members.  They then funded pet projects unrelated to COVID, from a parking garage to a luxury housing project downtown. Judge for yourself by looking at the funded projects detailed on their website here.

Broome County’s $37 million: where did it go?

County finances receive far less attention by the press and community groups.  A freedom-of-information request to the county asking for ARPA expenditures was submitted in September 2022.  It finally received a response in January 2023.  It may be downloaded here.

The summary results? While lots of groups were funded, no substantial money went to address the health impacts of COVID, the local housing crisis, or the mental and physical health aftermaths of COVID.  In the midst of the fentanyl/tranq epidemic exacerbated by COVID isolation and poverty, we cannot fund, for example, the community-based initiatives other cities and counties have launched.

Who were the big winners?  Developers and the Sheriff–and a distant third group, county parks.

Here are some of the developers’ pet projects, all charging commercial, market rate rents:

None of these projects are contingent on providing the numerous living-wage jobs and low-income housing we need. Indeed as has happened in both Binghamton and Johnson City, they are likely to decrease affordable housing for poor and Black residents as gentrification and expensive housing projects continue to proliferate around new SUNY downtown buildings–and displace existing lower-rent housing.  As reported in the SUNY campus newspaper Pipedream, “BU has acquired over 30 plots of land throughout Broome County to expand the school, demolishing the 50 single-family homes and apartments in them.” Lacking customers due to gentrification driven by the SUNY Nursing school, the last supermarket in downtown Johnson City closed, driving people to overwhelmed, nearby pantries. Faced with public debate over the impacts and cost of student housing, SUNY Chancellor John King in a visit to Binghamton this past week coldly asserted this was the cost of “economic development.”

And most of the ARPA projects already have been underwritten by   state, county, or municipal funding . The most egregious diversion of public funds? Up to thirty years of tax exemptions through so-called PILOT agreements provided by local development agencies as reported by the press. In Broome County these have granted property and sale tax rate reductions and exemptions, most notably for one luxury housing development after another.  As recorded in cost-benefit analyses by the Broome County Development Agency, these include $4.7 million in rebates for the EJ Victory Building in Johnson City (156 apartments) and, in Binghamton, rebates worth $7.5 million for the Ansco building on Emma Street (100 apartments), $16.8 million in tax abatements for the owners of the “50 Front Street Luxury Apartments” (122 apartments, opening with the highest local rents), $3 million for Chenango Place on Court Street (94 apartments), $6.5 million for the gated, luxury student apartments next to the SUNY Downtown Center (127 apartments), and another $9.4 million rebate to the developer of the Oakland Mall—to mention but a few. ARPA adds more fuel to the bonfire elimination of corporations’ tax bills, while, like new, tax-exempt SUNY and hospital operations, increasing demand for more city services.

Up on the Hill: The Sheriff’s $ 7 million

Pushed aside and out of sight, where will the homeless and people with health problems go? For far too many the jail has emerged as the county’s major substance use and mental health “treatment center.”  And that’s what the county funded from ARPA, giving $7 million to the Sheriff for unspecified purposes.

The Sheriff has a $42 million budget, with the jail accounting for $32 million. Why the additional $millions? The need for road patrols surely did not increase under COVID.  Nor did jail numbers.  Indeed due to lower crime and criminal justice reforms the jail population has been dropping for years. Built and expanded to incarcerate 600 persons, the local jail population rarely exceeds half that number. Last month there were fewer than 300 local residents in the jail (and only 52 convicted of a crime). The number of Correctional Officers had also fallen proportionally.

And yet an additional $7 million was allocated from ARPA funds.  Democratic and Republican County Executives and Legislators have for decades privileged the jail. But what are the $7 million being used for? A hiring boom for up to 38 more Correctional Officers is apparently underway according to the press. How is this justified?

This is a costly commitment, for correctional officers are expensive. Of the 46 county employees who earned over a $100,000 in 2021 (the last posted year), at least 32 are correctional officers (and all but 5 of the 46 are employed by the criminal justice system). The highest paid employee? District Attorney Korchak. Its the cost of making Broome County, of all 62 state counties, the county with the highest jail incarceration rate.

It is too late to turn back irresponsible ARPA spending: although ARPA funds may be spent over 5 years, over $32 million of the county’s $37 million has already been spent. We can–as has the community group working on the City of Binghamton ARPA funds–press local officials to hold public hearings, account for their decisions, and reallocate remaining and future county monies to meet community needs.

As the story of county use of ARPA and Broome County Development Agency funds demonstrates, however, the problem is deeper and long-standing.  Corporate and political elites–all too often an interlocking web of developers, real estate interests, and lineage politicians–have long captured county and city funds.  Overturning this corporate/political complex, and allocating public funds to real human needs like housing and health, will require an equally long-term community struggle.