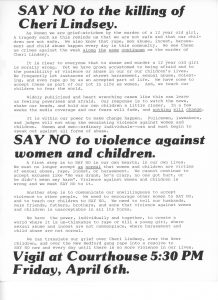 On March 26th 1984, Cheri Lindsey was collecting payments on her paper route and was raped and murdered by James Wales. He is serving a life sentence. His house was recently torn down. Her parents have kept her memory alive and a mural of Cheri is at the park named for her on the Northside.

The flyer went on to tell the community:

“It is clear to everyone that to abuse and murder a 12 year old girl is morally wrong. Yet we have grown accustomed to being afraid and to the possibility of violence or abuse in our, or our children’s, lives. We frequently let instances of street harassment, sexual abuse, molesting, and even rape go by as an accepted part of life. We have come to accept these as part of our lot in life as women. And, we teach our children to fear the world.

Widely publicized and heart wrenching cases like this can leave us feeling powerless and afraid. Our response is to watch the news, shake our heads, and hold our own children a little closer. In a few weeks the media coverage and our fears will fade, and nothing will change.

A first step is to SAY NO in our own hearts, in our own lives. We must no longer accept as normal that women and children are victims of sexual abuse, rape, incest, or harassment. We cannot continue to accept excuses like “He was drunk, he’s crazy, no one got hurt or he didn’t mean any harm.” Violence against women is wrong and we must SAY NO to it.

Another step is to communicate our unwillingness to accept violence to other people. We need to encourage other women to SAY NO, and to teach our children to SAY NO. We need to tell our husbands, male friends, fathers, brothers, and sons that violence against women and children is unacceptable in all its forms.

We have the power, individually and together, to create a world where it is un-thinkable to rape or kill a young girl, where sexual abuse and incest are not commonplace, where harassment and child abuse are not normal.

We can translate our grief over Cheri Lindsey, over the Neer children, and over the New Bedford gang rape into a resolve to SAY NO now and every day until there is no more violence in our lives.

(The archives of the Women’s Center is being donated to the Local Collections of the Binghamton University Library. The Bridge will feature occasional historical documents on its pages.)