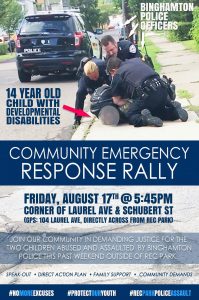 A 13-year-old girl was placed in handcuffs, with witnesses at the scene describing officers forcefully lifting her off the ground after she was restrained. She was accused of spray painting a nearby wall. The girl was in distress, which prompted multiple residents to stop and document the interaction. She was later released to her parent after spending nearly a half hour in handcuffs.

A 14-year-old boy with developmental disabilities was also inexplicably stopped, searched, and taken into custody while observing the event. He was pinned down by three officers before being handcuffed and locked in a police van, where he repeatedly banged his head on a security panel as officers stood by.

Additional officers arrived on the scene, escalating the situation with the children and frightened witnesses observing the incident.

Join our community in demanding justice for these two children abused and assaulted by Binghamton Police.