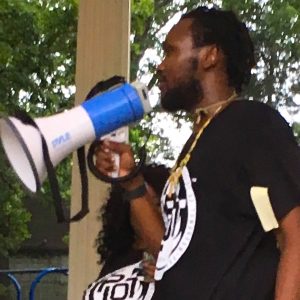 PLOT (Progessive Leaders of Tomorrow) held a March and Rally to Protest the August 11th incident involving two black teenagers near Rec Park in Binghamton. About 150- 200 people attended chanting “Use Your Body. Use Your Privilege.” Kymel Yard, PLOT speaker explained, “We each may have some privilege, as a male, or white… and we need to use that privilege for someone who has less privilege.”

Organizers told the story of the incident:

A 13-year-old girl was a placed in handcuffs, with witnesses at the scene describing officers forcefully lifting her off the ground after she was restrained. She was accused of spray painting a nearby wall. The girl was in distress, which prompted multiple residents to stop and document the interaction. She was later released to her parent after spending nearly a half hour in handcuffs.

A 14-year-old boy with developmental disabilities was also inexplicably stopped, searched, and taken into custody while observing the event. He was pinned down by three officers before being handcuffed and locked in a police van, where he repeatedly banged his head on a security panel as officers stood by.

Additional officers arrived on the scene, escalating the situation with the children and frightened witnesses observing the incident.

Among the demands the group called for: