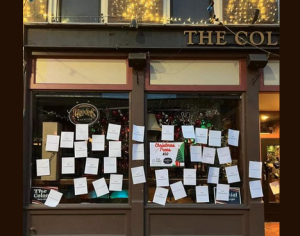 Anti-rape signs posted on the window of the Colonial during Downtown Shutdown. Photo from FB page Binghamton Believes Survivors of Sexual Assault.

A Facebook group called Binghamton Believes Survivors of Sexual Assault and a business, Tea and Things called for a “Downtown Shutdown in Response to Sexual Assault” There have been multiple allegations that there have been rapes in three downtown restaurants, The Colonial, Dos Rios, and The Stone Fox. All three restaurants were temporarily closed but The Colonial announced it would re-open. (It did not apparently.) Over 700 people responded to the Facebook event. The event was scheduled for 8:15pm Saturday night and about 100 people protested with signs such as “Baseless Claims? Check your Basement, Babes”, “Beds Don’t Belong in Bars”, “Store Liquor in Your Basement, not Women”, “End Rape Culture.”

After initially posting their “concern” on Facebook, owners of the restaurants later denied any wrongdoing and called the call for protest “cancel culture.” Local police and DA are investigating and interested in anyone with information  and encouraged to call 772-7080.