December 28, 2019 Make no mistake about it: they are afraid. Very afraid. For the state’s new bail reform bill threatens to undermine what our bloated elected officials have spent decades constructing: the machinery of mass incarceration that siphons funds for health and social services into policing and jailing innocent persons.

The new bail bill is straightforward: most of those charged with misdemeanor and non-violent crimes will no longer be given high cash bails. Over 70 percent of the persons in the local jail are rotting there because they can’t afford bail. And many–indeed most by the Sheriff’s and District Attorney’s own accounts–have substance use or mental health problems for which there is little if any treatment in the community. The wealthy among us, of course, don’t have this problem: they can post the high bails and afford private medical treatment. They walk free to await trial, while the poor and sick linger in the jail.

The bill comes into effect on January 1. Sheriff Harder estimates it will free 120 persons from the jail; USA today estimates 150; Vera Institute, a research group, estimates up to 80% of the 410 or so persons in the jail now might come home. These numbers are higher than expected.

The prospect before us nevertheless remains that the jail–enlarged at a cost of $7million in 2015 to hold over 600 persons–may soon hold far less than half that amount. The cost of building and running the jail, not to mention additional policing and court costs, has grown year after year under both Republican and Democrat County Executives:

Rolling back these operations threatens the power base of Sheriffs, Undersheriffs, and Mayors whose powers and influence have grown fat on the institutions of mass incarceration. State Senator, former County Undersheriff, and current patrolman Frederick J. Akshar II unleashed an inflamed blast yesterday, calling the bill “nothing more but a criminal’s bill of rights”:

“The misguided and overreaching bail reform laws enacted by New York’s One Party Rule will go into effect, handing out new “get-out-of-jail-free” cards for an exceedingly long list of crimes…[1]

At least we know that the Senator plays monopoly, where wealth, as in the bail and political systems, rules. 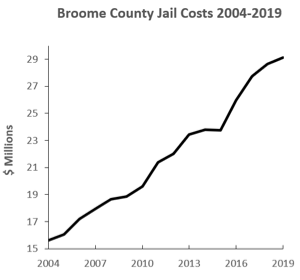 n Mayor Richard David, who has significantly expanded the city’s police force year after year even as crime rates fall, leads a statewide group of Mayors to oppose the bill and related justice reforms.[2] Broome County Sheriff David Harder has done the same with Sheriff Associations.[3] Democrat Congressman Brindisi, looking to the next election, has added his voice to the opposition to reform as well.[4]

These efforts are not likely to be successful: communities across the state have rallied to roll back mass incarceration and mass policing that have unnecessarily jailed tens of thousands in our debtor’s jails and prisons.

What should we do? We might follow Justice and Unity for the Southern Tier’s local call to reduce the jail population by at least 70 percent, and plan immediately to reallocate 50% of the jail’s annual budget, at least $15 million, to community-based services and needs.[5] Providing health and treatment services for our residents, rather than pretending incarceration can solve health problems and the lack of housing and jobs, hasn’t served us well. Its time to move on. This is a time of opportunity. We should seize it.

Bill Martin   Article reprinted here with permission and is also posted at www.justtalk.blog

Justice and Unity for the Southern Tier: Key Objectives (November 2019)