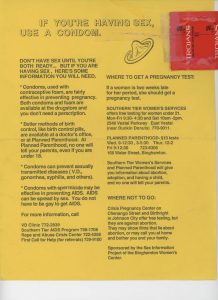 The Binghamton Women’s Center was founded in 1973 and exists to the present in the form of the Center for Gender, Art, and Culture. In its earliest iteration, the Women’s Center was a multi issue organization with community meetings and a loose committee structure to address issues such as sexual assault, abortion, divorce and displaced homemakers, lesbian rights, domestic violence and child abuse, women’s health, poverty and housing issues, etc. For several years the Women’s Center ran an information and referral service to offer women callers referrals to a variety of services, including sympathetic lawyers, health professionals, abortion providers; staff were paid by Opportunities for Broome through the CETA (Comprehensive Employment and Training Act) program. 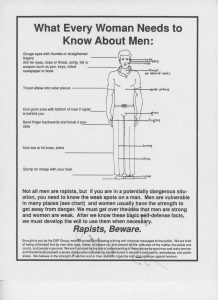 focused on activism on this issue, particularly demanding that police and prosecutor’s office pursue cases against rapists and abusers. Their efforts in 1977 resulted in the formation of the Rape Crisis Center (later the Rape and Abuse Crisis Center and now the Crime Victim Assistance Center). The RCC established the first 24 hour volunteer hotline which has been answered continuously by trained counselors for the past 40 years. The SOS Shelter, which was opened a few years later benefited from the Women’s Center and Rape Crisis Center’s public education and participation. On May 3, 1988 a large Take Back the Night march demanded the “elimination of violence against women.” Another one was called for October 29, 1992.

Another active committee gave a presence and voice to lesbians; the Lesbian Switchboard was established in 1978 to provide a contact point and referrals to services. Herizon, a women’s social club, founded in 1975 and enduring until 1991, was another outgrowth of lesbian organizing through the Women’s Center.

Hera, a Women’s Newspaper that was published monthly (and eventually 10 months a year) for 16 years. Popular columns in the paper were “Consumer Guide to Men” which replicated arrest and convictions records for sexual assault or domestic violence as reported in the Press. “Video Drone” was a witty review of old movies by Teri Walters; also included national feminist news, local organizing, and women’s and lesbian cultural events. The 8 page newspaper chronicled local organizing on a number of local actions as diverse as pro choice demonstrations, women’s music concerts, the American Dance Asylum, the anti nuclear Shadow Project and the Seneca Women’s Peace Encampment. Copies of Hera are in the collections at Binghamton University and Broome Co Historical Collection at the Public Library. In 1996 Hera ceased publication and a magazine format Celebrating Voices was published for several issues. Together they document feminism in the 80’s and 90’s.

For over a decade the Women’s Center raised money in a one day event every August called the WonderWoman Festival. It included local entertainment, a rowdy auction of goods and services, food, and other events and fundraisers. “WonderWoman” was a focal point for the community, particularly allowing lesbians to be visible and participate.

Another significant feminist presence was a loose collection of “unidentified” feminists (referred to as “concerned women not affiliated with any organization”) who issued a series of controversial educational flyers. The most famous of these was a flyer announcing a City of Binghamton Curfew for Men, which was taken seriously by many men and garnered a lot of local press.

Other flyers in the series were: “How to Tell if your Fiance is a Batterer” distributed at a Bridal Fair; a Self Defense flyer with an illustration of the vulnerable points on a man distributed in women’s bathrooms in bars, a condom handout that warned of local Crisis Pregnancy Centers given to young people waiting to get in Aerosmith rock concert.

In 1989, the Women’s Center participated in a collaborative effort called the SPACE (“The Space for Political And Cultural Expressions”) with other groups including Carousel Arts Collective, Herizon, Women’s Center, SYOL (Save Your Own Life), Inesse: Emerging Women Artists, People Living with AIDS, KUUMBA. This was a way of keeping a space with several groups collaborating but it was not successful.

In 2006 the Women’s Center expanded its mission and changed its name to The Center for Gender, Art, and Culture (CGAC) and has functioned as an umbrella for several progressive committees. Some of the activities under their auspices have been: the Independent Media Center which hosts www.binghamtonbridge.org; Binghamton Poetry Review; Herizon Archives; Wild Geese Films. Since 2012, the Department of Public Art, active in promoting and painting murals, is a major activity.

This paper was given at a conference on local history at the Bundy Museum and History Center in March 2018. It was recorded and is available online on their site.