The following letter, written by a resident living in the midst of construction for the Bluestone Wind industrial wind turbine project in Sanford, appeared in the August 3rd edition of The Deposit Courier. 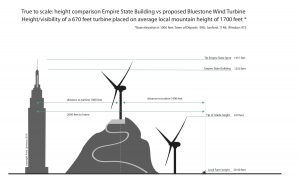 Ah! Apparently Bluestone (BS) Wind is taking the day off (July 17). The perfect peace and quiet of Farnham Road is so welcome after the weeks of work on BS Wind. On a typical work day, residents on the road are subjected to constant noise. Traffic on the road is continuous, nearly 300 acres of woodla,,nd have been forever ruined, and the noise is relentless. Tempers are flaring due to the stress of this disruption to our daily lives. Quiet days like this one are so rare and they are ruined as well because we know that future stages of the project will involve construction 24/7 instead of day break until dark.

In the morning there are an incredible amount of vehicles going up Farnham, all with one occupant. Even the pipeline projects ran a work bus to avoid some of this annoyance to local residents. The workers on this project love to drive around Sanford. We often see the same vehicle(s), with one occupant, apparently just driving back and forth to the various work sites all day long. The heavy equipment trucks, often moved with no pilot vehicle, are already breaking up the roads. Now tractor trailers and/or concrete trucks run most days. Imagine going from one milk tanker running every few days to tractor trailers every few minutes. As these huge vehicles travel Farnham one can hear as they hit every single culvert BaBOOM! BaBOOM! all the way up and down the road. Many of them travel at unsafe speeds for a narrow, curvy, rural road. Runners have been forced to jump the ditch to avoid being hit. Trucks have come so close to me while I was walking that I thought I was a goner for sure (my jumping the ditch days are behind me). Are these intimidation techniques or simply lack of regard for the residents and human life? The diesel fumes are intolerable, especially when you know diesel fumes are a major carcinogen leading to breast cancer because the particulates are small enough to pass the capillary barrier and are estrogen receptors. (Kerryn W Reding, PhD Epidemiology)

Anyone that follows the “100 years ago” column in the Deposit Courier will recall reading about how excited people were to see a deer in the area. As I read that I wondered why, we see deer every day. As it turns out these beautiful wooded hills were destroyed once before by clear cutting for lumber to send to NYC and to supply the acid factories. Not too long ago, Sanford set long term goals for the area to “maintain the rural character” of the area, and to limit industrial development to Rt. 41 and Rt. 17.  I mistakenly thought those statements meant that as a community we were smarter than this, that we wouldn’t allow that kind of destruction to happen again. Yet, here we are. Our board worked quietly to change zoning to allow this project. Did you know that once land has been zoned “industrial”, and development continues, it can never go back to zoned “agricultural”? There’s nothing quite like the sound of nearly 300 acres of forest being clear cut, entire trees run through chippers, stumps being ripped from the ground and chipped.  Every single agency that has any opinion on the climate change debate recommends planting trees not cutting them down. How much carbon was sequestered in those 300 acres of forested land? An acre of mature trees can sequester up to 30,000 pounds of carbon, 300 acres holds roughly 9 million pounds! A single acre of woodlot would counter the emissions of about 2.7 cars, multiply by 300 acres, that’s 810 cars. At the same time the forest would be providing 22,000 pounds of oxygen, multiply by 300, that’s nearly 7 million pounds of oxygen. (Estimates from Cornell professor, Timothy J. Fahey). Those trees would have continued to take in carbon and provide oxygen long beyond the life span of these turbines, if they had only been left to grow. Now we are informed in the BS Wind Newsletter, the Breezy Bulletin (isn’t that a cute name for propaganda?) that they plan to begin blasting at 16 of the 26 turbine sites soon. That’s just great.

People living in a rural area, especially longtime residents, value quiet. There’s nothing quite like sitting in the back yard listening to the sounds of the birds, the creek running, the leaves rustling softly. Enter BS Wind:  truck traffic is constant, when some of the huge trucks go by, you can feel the vibration in the house; the noise of heavy equipment in the woods is persistent and the shrill ear-splitting BEEP!BEEP!BEEP! of incessant back up alarms and Jake brakes ruins being outside, or having windows open. Then there’s the random worker that feels the need to have his radio blaring as he goes up the road, in his unnecessarily loud vehicle, traveling at an unsafe speed. A little consideration goes a long way.  It’s clear that this developer has no idea how noise travels around these hills and valleys, and has zero regard for the residents. So what do you suppose will happen when the turbines are making noise over the allowable limit? Or shadow flicker is making a resident’s life miserable? My guess is BS wind will care even less then, because their worthless drains on the system will already be built, they will have collected their subsidy payment. They will either move to push more of these monstrosities into Sanford, or move on to the next unsuspecting town.

Sanford residents are already paying the price for this development with the loss of our quiet enjoyment, lowered property values, loss of the use of our road, view sheds destroyed, for an insignificant, if any, gain in energy production. A study and resulting document prepared for NYSERDA titled The Effects of Integrating Wind Power on Transmission System Planning, Reliability, and Operations states, “The results show that the effective capacities, UCAP, of the inland wind sites in New York are about 10% of their rated capacities, even though their energy capacity factors are on the order of 30%.” So the industry blows their production estimates up for their propaganda campaign, then they admit that their actual production can only achieve 30% of that figure, but the data shows that, in fact, they are producing much less at only 10%.  Now, build these things in a “minimal wind resource” area like Sanford, what do you suppose their energy production will be? Don’t fool yourself into thinking this is about producing energy or fighting climate change, this is about Northland and all their sub-contractors getting a piece of the subsidy pie. That’s our tax dollars being thrown away on a worthless development.

There are two kinds of people when it comes to this development: those that think the developer will have the best interests of the community in mind, and those that think.