As City of Binghamton and Broome County prepares their annual budgets, we should be thinking about how we would like our taxes allocated in our community. $1.2 million of taxpayer money has been allocated to adding 12 more police officers to our already very large police force. This is done in the name of public safety concerns. However, during a global pandemic and in the midst of protests against police brutality, are police really a wise investment in public safety?

While Black Lives Matter rallies are happening on an almost weekly basis here in Binghamton and in surrounding Upstate New York cities, the role of the police force is being reevaluated. Police forces have historically been formed to protect property, which in their origin has included the capture of escaped slaves. Incarceration rates are still astronomically disproportionately affecting black folks, proving a legacy of perpetual institutional racism and profiling. The brutality in the deaths of Breonna Taylor and Elijah McClain were in the hands of police and could be considered murders. There is a clear need for police reform and how we can have public safety without a powerful police force.

Divest and Reinvest in Our Community (DAROC) is a local coalition of community organizations which have been holding public outdoor community meetings to talk about ways to reinvest our bloated police budget into more relevant community initiatives. Based on their community outreach, residents agree that Binghamton could reinvest $1.2 million from the annual police force budget into a combination of any of the following:

Binghamton, NY has more police officers per capita than many cities of similar population size. It’s time we work together to reinvest our tax payer money into community initiatives that directly support our children, families, working people, and everyone, not just police officers. De-funding the police means reinvesting into public services which will serve the community in more direct ways. For future meetings and updates, visit the DAROC Facebook Page. 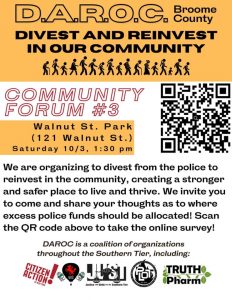 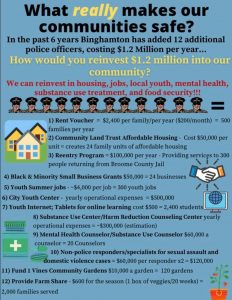 The surprisingly unadvertised Binghamton Budget Release is Tuesday, October 6th at 5:30pm. Historically, Mayor David has only allowed one public comment hearing before passing a budget in the City. Virtual work sessions for the City makes it even more difficult, and unlikely, to have our voices heard in the community. If this is something you care about, make sure you get your public comment in as soon as possible. D.A.R.O.C. will be rallying in front of City Hall at 5:00pm before the budget announcement.

Edited October 5th: Date for Binghamton Budget meeting is Tuesday October 6th, not Wednesday. D.A.R.O.C. will be rallying at 5:00pm, before the budget meeting.