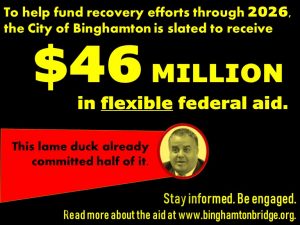 Binghamton received the first half of the unprecedented federal recovery award, $23 of $46 million, this summer. According to the 8/16 City Council Work Session Packet, Mayor David has already programmed every penny.

And aside from a last-minute, face-saving announcement of $6 million for affordable housing, not a single penny is being allocated to help those harmed by the pandemic.

Worse, the Mayor is now questionably and outrageously asking for City Council’s approval to sweep $12,500,000 into the General Fund, even though City Comptroller Chuck Shager’s own initial analysis in July estimated  that COVID-19’s impact to city finances amounted to about $3,400,000.

For those keeping score, here are Mayor David’s priorities:

That’s more than $23 million of federal dollars intended to help those harmed by the pandemic crisis (and the Delta variant suggests the harm will be ongoing for some time) that have instead been allocated to outrageous, callous, and irresponsible projects. Mayor David’s decisions completely disregard the recovery needs in our community, such as food security, housing security, financial security, mental health, child care, community safety, and public health to name a few.

The decisions are reckless for two other reasons.

Second, in addition to giving communities more than 5 years to spend the funds, the U.S Treasury’s guidance implores local, county, and state governments to use the funds to ensure an equitable recovery that centers the needs of those most harmed by the pandemic, as well as those historically harmed by racist and unjust policies.

Yet here we are, not even three months since the first half of the award was wired into the City’s bank account, and Mayor David—without any public forum or inclusive effort to solicit community needs—has already programmed 100% of the recovery dollars.

The second $23 million won’t be available until June 2022–so whatever happens with the Delta variant this winter, we’re on our own.

Mayor David’s decisions—aided and abetted by the four Republican on City Council—are not just shameful. They’re actually threatening and harmful to our community.

While it’s virtually certain the Mayor’s requests will be rubber-stamped by his four ever-loyal, unthinking GOP servants, we as citizens have a moral obligation to raise our voices—and uplift the voices of our struggling neighbors who are being shamefully neglected and denied by our elected Republican officials—and communicate our disapproval.

This week offers us an opportunity.

If you oppose the “priorities” outlined above, and believe that the City must instead commit federal recovery dollars to the needs of those most harmed by the pandemic—which has caused a public health, housing, and economic crisis—then please show up at the City Council meeting on August 18 at 6:00pm. The meeting will begin with a chance for the public to provide comment (up to 5 minutes per person).

Below is some more detail about David’s specific request to sweep an obscene amount of recovery dollars into the general fund, and why it’s problematic and reckless.

WHY THE PROPOSED GENERAL FUND ALLOCATION ($12,500,000) is IRRESPONSIBLE

To be clear, local and state governments are allowed to use recovery funds to address the negative fiscal impacts caused by COVID. This includes losses in revenues caused by the pandemic and the lock-down, and for Binghamton, some examples would be a reduction in sales tax, parking fees and fines, blue bag fees, permit fees, etc. This also includes additional expenses incurred by governments to address the pandemic, such as modifications made to the workplace to achieve safety compliance, overtime by first responders, purchasing PPE, etc.

Fortunately, the City’s general fund is very healthy and at historically high levels. See the table below, which shows the end of year unassigned fund balance for years 2007 through 2020. The data is pulled from NYS Comptroller’s online portal, which is based on reports submitted by the City annually. 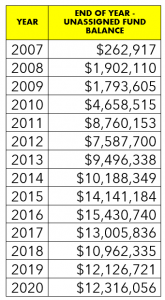 What does unassigned fund balance mean? How much of the fund balance that is not designated or reserved. It’s like the City’s “piggy bank.” Consider your own checking account. Your balance may be $1,000, but you just mailed your $600 rent check, and you have a monthly car payment of $100 that auto deducts from your account in two days. So your unassigned fund balance is $300, and that’s the flexible spending you have to cover other needs.

As the Table shows, even after a difficult year with COVID-19, the City reported to the State that its unassigned fund balance actually grew, remaining at historically high levels.

So while the Treasury permits governments to use a portion of the recovery award to help address the pandemic’s negative impacts on finances, no government is obligated to. And Binghamton’s finances, before and during the pandemic, remain very healthy and strong.

Shager conducted a line-by-line analysis (pages 25-26) of all revenue items, and computed the loss to be $3,525,645. But the Comptroller then applied a 4.1% inflationary index (allowed by Treasury), which brought the amount to more than $6 million.

That number has now ballooned. And this Monday, August 16, based on guidance from an accounting firm hired by the City to assist with implementing the recovery program, Mayor David and Comptroller Shager will be asking Council’s approval to sweep about $12,500,000 of recovery dollars into the City’s General Fund.

This is outrageous for many reasons, but here are the key ones:

If the City Council Democrats, can’t stop this indefensible proposal, then at the very least they should propose to amend the legislation, reducing the amount to the actual revenue dollars lost (with no inflation index), which is $3,525,645. That would protect and retain $9 million in recovery funds that could go to meet urgent needs in the community.

FINAL THOUGHT: IS THE MAYOR LAUNDERING THE RECOVERY DOLLARS?

Something else is going on here.

Given there’s no legitimate reason why the administration would sweep an obscene amount of recovery dollars into a very healthy general fund (and how peculiar and odd it is that the amount requested went from $3.5 million to then $6.2 million to now $12.5 million), some residents have wondered if this is a callous and selfish political move by our lame duck Mayor so he can take credit for an inflated general fund balance and present himself as some financial wizard for the next 15 months while campaigning for a NYS Senate seat.

I have a second concern, which I expressed at the last Council meeting. That the Mayor is attempting to “launder” the recovery dollars.

How? The Mayor dumps an inflated amount of recovery dollars into the general fund, then “pulls” general fund dollars out from now until the end of the year on projects that would not have been eligible under the Treasury’s guidelines.

The agenda for the Monday City Council work session meeting (8/16/21) also includes a request by the Mayor to pull $1,100,000 from the general fund to purchase 12 vehicles for the Police Department (3 pick-up trucks, 5 unmarked cars, 1 crime scene vehicle, and 3 SUVs) and five trucks/machines for Public Works Department. A screenshot of the Mayor’s request is pictured above.

None of these were included in last year’s budget, and one Council member I spoke with said this is the first they are hearing of this.

Both requests–shoveling $12.5 M of recovery funds into a very healthy fund balance and withdrawing more than $1 million for police and public works vehicles–should be rejected.

But as we’ve seen for years, the four Republican Council members have proven again and again that they lack the independence and courage to stand up to our bullying Mayor. Once again, it will come down to concerned citizens, exercising their First Amendment rights by speaking out at Council meetings and, if needed, engaging in that tradition that’s as American as apple pie–organized protest–to hold our “leaders” accountable.

This is not Rich David’s political slush fund. This is our community’s recovery fund.

Please make your voice heard this Wednesday at 6:00pm down at City Hall–and bring friends, especially those who are still trying to recover from this ongoing crisis.

Tarik Abdelazim currently works for a national nonprofit that helps communities address systemic vacancy and disinvestment in support of equitable development, and previously served as the Director of Planning Housing and Community Development for the City of Binghamton. He is a frequent contributor to The Bridge.