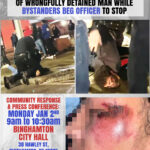 In the early morning of New Years Day white frat boys jumped a man of color in downtown Binghamton. Police stood by and watched—white students fighting downtown is not uncommon. As the fight escalated, friends and bystanders (people of color) intervened in an attempt to stop the man from being injured. That's when police got involved—attacking Hamail (who is … END_OF_DOCUMENT_TOKEN_TO_BE_REPLACED