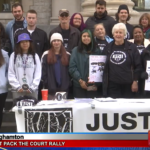 NYS Supreme Court Judge Blaise had a straightforward question: Where is the Sheriff? In his defense of County Sheriff David Harder, Broome County Attorney Robert Behnke had no adequate answer. Charged with contempt of court in the motion brought by Justice and the Unity for Southern Tier (JUST), Harder failed to appear. Law and Ill-Order in Broome … END_OF_DOCUMENT_TOKEN_TO_BE_REPLACED