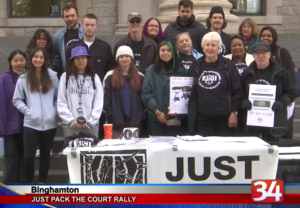 NYS Supreme Court Judge Blaise had a straightforward question: Where is the Sheriff? In his defense of County Sheriff David Harder, Broome County Attorney Robert Behnke had no adequate answer. Charged with contempt of court in the motion brought by Justice and the Unity for Southern Tier (JUST), Harder failed to appear.

Law and Ill-Order in Broome County

The members of JUST packing the court knew the answer: as part of a long legal contest, the Sheriff had lost the lawsuit they had brought on behalf of families and friends of those incarcerated in Harder’s jail. In his ruling on July 29th, Judge Blaise ordered Harder to reopen visitation on the pre- COVID schedule posted in the jail’s own handbook. Harder’s officers in the jail had long been telling the incarcerated that Harder wouldn’t let this happen. When the County’s appeal to delay re-opening was denied on September 22nd, Harder was thus forced to finally reopen visitation.

Yet when the County finally opened up the jail doors on September 29th, Harder defied the Judge’s ruling. To the surprise of family members knocking on the door of the jail, visitation hours were posted for highly restricted times. Harder had unilaterally reduced visiting from the pre-COVID schedule of 44 hours a week, to 15, and visiting days from five to three—with none on the weekends for persons who work or live out of town. 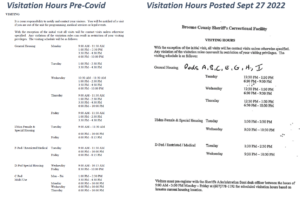 On the threshold of retirement, pending election of one of his former deputies, Harder was again refusing to obey state laws–and now the State Supreme Court. To observers of justice in Broome County it was another case of law and ill-order.

On October 7, on behalf of JUST, Josh Cotter of Legal Services of Central NY, filed a motion and affidavits charging Harder with civil and criminal contempt of court, with personal and financial penalties.

Before the contempt hearing on October 29th, JUST members and supporters rallied in the chilly morning on the steps of the county courthouse. The gathered families and friends of the incarcerated  told numerous stories of their inability to visit daughters, sons, fathers, partners, and friends under the posted hours.

Meanwhile, fees for telephone and video calls remained exorbitant. Many of the county’s poorest residents were spending close to $1000/month to maintain contact with family in the jail and provide necessary food and hygiene products.  Banning visitation held a warped, punitive, financial logic here: the Sheriff had reaped $ millions in profits from his share of expensive calls and commissary purchases,  outside any county control. And he spent it on personal diversions, among them his second, armored personnel carrier.

Statements from incarcerated persons and family members unable to attend the rally due to work or distance repeated these complaints:

“Does this mean my mother can’t visit me?”
“I can’t visit since I work and live in Syracuse”
“I keep calling but can’t get through to book a visiting hour”
“I’ve spent $800-$1000 every month to talk to my husband awaiting trial”
“I booked a visit with the Sheriff’s office but when I came was refused the visit”
“We need to be paid back for the $ thousands we’ve spent due to him denying visitation”

At 11 am, after the rally, over 30 JUST supporters went through metal detectors to attend the hearing, where they were faced down by a phalanx of grim, armed court security.

At the hearing, Judge Blaise questioned both Josh Cotter of Legal Services of Central NY, acting on behalf of JUST and families, and Broome County Attorney Robert Behnke, defending Sheriff Harder. In earlier legal briefs, the County had defended continued denial of visitation on grounds of COVID precautions. This was, however, increasingly implausible, given that visitation had long since returned to nursing homes, all state prisons, and jails across the state. Indeed, the Sheriff had long shown indifference to COVID, never requiring his staff to get vaccinated. And when visitation opened up on September 29th, there was no social distancing or masking.

The excuse for the Sheriff’s actions put forth submitted in court by Behnke on October 28th was thus a new one: Harder’s restricted hours were said to follow a formula provided by an official of the State Commission of Correction (SCOC). This formula had never been seen before, and certainly wasn’t in any posted regulations of the SCOC. The Commission had not met and approved this application either, as is required for variances or modifications of jail practices. Nor had one of the three SCOC Commissioners, all previous Sheriffs or Wardens, signed off on it. It was, rather, a SCOC administrator who had negotiated the new visitation regime directly with Harder. This was, as the Judge suggested, a last minute invention.

As JUST’s lawyer rightly pointed out: visitation rights are guaranteed in the state constitution, and rights can’t be limited by county officials.

The Judge’s ruling is expected in a week.  Stay tuned.

All court documents may be found at https://bit.ly/3fdmQET.