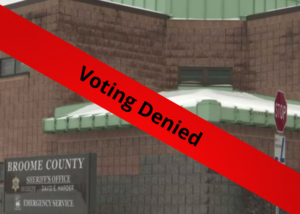 Last year Broome County was the center of national attention and endless robocalls, all focused on our swing-district, congressional race between Tenney and Brindisi—an election settled by a mere 109 votes. In Broome County, even a few votes win an election.

Getting out the vote under these conditions becomes a big campaign itself. So too is the game of suppressing or denying access to voting. This has been much in the news lately as some states limit access to registration, voting by mail, or weekend voting. It happens here too, where disenfranchisement has targeted far more persons than Tenney’s margin last year: the outright denial by county officials of voting rights to the hundreds of eligible voters held at the Broome County jail.

The vast majority of people in our county jails have a right to vote. You lose the right to vote if you are incarcerated for a felony. You don’t lose it if you are accused of a crime but not convicted, or if you are convicted of a misdemeanor. And those in the jail locally? Of the 335 persons housed in the jail last month, only 43 are reported as being convicted and sentenced for a crime, and that includes those convicted for misdemeanors. The vast majority are awaiting trial. Such persons often spend months and years in the jail.  Statewide, there are almost 10,000 persons in jails outside NYC, and less than 20% are convicted and sentenced.

Voting should be simple: persons in the jail need information, access to registration and absentee ballot request forms, a stamped envelope to mail forms in, and the ability to later send in a mail-in ballot. The rules are clear, and the League of Women Voters has a straightforward voting guide for those who are or have been incarcerated for a felony. And yes, in some jails the rules for voting are posted, and volunteers visit to register persons. In a few jails, voting booths are made available right in the jail.

But not in Broome County.

The Sheriff refuses to permit any arrangement at all. In the past he has told persons to apply through the jail chaplain and the Broome Council of Churches, but this has proven impossible: persons are denied access. Persons inside have actually been threatened for asking about trying to vote.

The situation is well known to local voting experts and advocates, but not the public.

One doesn’t need to go to apartheid South Africa or the US South to see voting disenfranchisement: it is covert county policy. The postmark deadline for registering to vote for November’s elections is October 14th. Long before that date we need county officials, elected representatives, and the Board of Elections to open the doors to voting for all in the county.

Bill Martin is Professor Emeritus, SUNY-Binghamton and a founding member of Justice and Unity for the Southern Tier