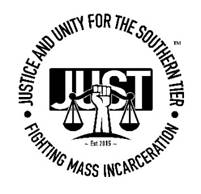 How do the Sheriff’s refusal to resume in-person visitation along with for-profit inmate phone calls enable him to buy military vehicles without dipping into the Broome County budget?

Banned in-person visitation: Sheriff Harder has refused to restart face-to-face visits, now that pandemic restrictions have been lowered, despite the fact that prisons and county jails across the state have done the same. In support of families desperate to remain in contact with loved ones locked behind closed doors, Justice and Unity for the Southern Tier and families of the incarcerated have filed a lawsuit with the assistance of Legal Services of Central NY demanding a return to family visits.

For-profit phone calls: Out of sight and unmonitored, the Sheriff reaps huge profits from running a monopoly telephone and video exchange for those incarcerated in the jail. A 15 minute call, costing only 65 cents from a state prison, can cost $3.75 to $9.95 from the Broome jail. The Sheriff skims off 44% of revenues from all telephone calls and 20% of all video tablet use. Profits in 2020 came to $373,000, and as COVID continued, rose to $655,000 in 2021. A freedom-of-information request was necessary to get this information.

Bearcats: No, we’re not talking about the BU mascot. This is a surplus military vehicle, an armored personnel carrier, most often used to carry SWAT teams into action or to counter civil protest. You may wonder why we need one in Broome County. Well, now we have two. The first local BearCat was obtained in 2019 by the Binghamton Police Department and introduced with celebration by the Republican Mayor, the Democratic County Executive, and our Republican State Senator. Over five years earlier, the Broome County Sheriff got himself an armored personnel carrier, a surplus apartheid war machine, a South African Casspir. Not to be outdone by the city, Sheriff Harder has apparently retired the Casspir and purchased his own BearCat for his own SWAT team – at the cost of $273,000. More detail at https://bit.ly/3LWnZLC.

Beatings: How does the Sheriff maintain a wall of secrecy about what’s going on in the jail? Inmates are afraid to speak out or file grievances for fear of retribution in the form of severe beatings. Only costly, and thus rare, lawsuits bring cases of abuse to light, as shown by the county losing its own record of successive wrongful death and physical, medical, and disability abuse cases. http://www.justtalk.blog/index.php/2022/03/26/got-a-grievance-about-abuse-today-tomorrow-ever-not-in-the-bc-jail-you-dont/

Cases related to the abuse of youth are particularly grievous, as in the 2018 case the Sheriff and County lost. As one expert witness testified,

“All the juveniles spoke of the harsh and abusive practices [of] the Correctional Officers (COs) with many identifying in exquisite detail the beatings they endured at the hands of the COs’…. [a] youth spoke of … [being] pepper sprayed while he was restrained. Still another youth spoke of the COs carrying batons they used to beat the kids; they reported that the COs refer to the baton as their “n-word [sic] beaters.”

This pattern repeats itself. Further lawsuits have been filed on behalf of another young man revealing brutal, racial abuse in the jail; abuse of trans women; and a new $5 million wrongful death case.

Harder’s final solution is simple. When he gets freedom-of-information requests that might uncover repeated beatings by identifiable officers, official discipline of officers for sexual relations with the incarcerated, or firings for drinking on the job, he just checks the box, “Record is not maintained by this Agency.”

Connecting the dots: Why are our elected leaders, Republican and Democrat, so eager to support our Sheriff? Is it because he’s making a profit on needed commodities at the jail, and thus benefiting the county budgets? Is that why he continues the ban on in-person visitation, when other counties don’t, so there’s more need for profitable phone calls? Or does it just make it easier to maintain the veil of secrecy around the jail? Can anyone answer why the Sheriff needs a BearCat?