When announcing Binghamton’s 2020 street improvement plan earlier this year, Mayor David promised the multi-million dollar investments would benefit all users and all abilities.

Unfortunately, the administration seems to be offering more rhetoric than results (again).  In fact, many street projects funded by local tax dollars in 2020, and years prior, have actually undermined the safety of bicyclists and pedestrians.

This is not only contrary to the Mayor’s own statements, but also in direct violation of official city policy.

In 2011, the Ryan administration introduced legislation to formally commit the city to building “Complete Streets,” and the legislation was enthusiastically approved by the Democratic-led City Council (copy of the legislation here). This was one of many actions, including the development and approval in 2011 of the City’s first ever Climate Action Plan, pursued by the Ryan administration to build a more sustainable and resilient city, and ensure investments were accommodating all users in an equitable fashion. 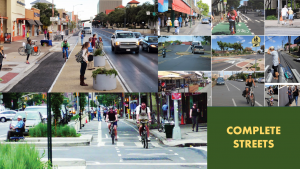 Unfortunately, the David administration has not complied with the city’s Complete Streets Policy, consistently prioritizing more miles of fresh pavement over street improvements that actually protect the safety of all users, such as bicyclists and pedestrians, as well as users of all abilities, like the elderly, those in wheelchairs, or the visually-impaired.

For example, this year the administration made “improvements” to Conklin Avenue between the Exchange Street and South Washington Street bridges. I’ve lived half a block from this stretch for ten years, so I know this area well.

The “improvements” included resurfacing the road, but also eliminating the back-in angle parking closer to the South Washington Street bridge. There is no question that these changes have reduced safety for all users.

Plenty of transportation research has shown that the wider a road, the faster drivers go, which is why so many strategies to increase safety involve narrowing the road. The back-in angled parking spaces purposefully consumed more roadway to slow traffic. By eliminating them and repaving this stretch, the David administration has created a smooth speedway daring motorists to violate the posted 25 MPH speed limit (adjacent to park). Trust me, motorists are embracing the invite.

I reached out to the Binghamton City Engineer about two months ago and asked if there were plans to add dedicated bike lanes to this stretch, since bike lanes would narrow the road and help slow traffic, providing greater safety to bicyclists along this well-traveled stretch (after all, it is a NYS designated bike trail). Suprisingly, the City Engineer answered no.

So much for Complete Streets.

Similarly, and also in my neighborhood, the city repaved Park Avenue from Vestal Avenue up past the hospital this year. This road used to have bike sharrows (those graphics on the road that look like bike emojis), but much to my dismay, the “improvement” paved over them. 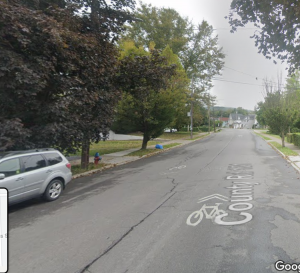 Google maps image showing the bike sharrows on Park Avenue. They have been paved over and eliminated with this year’s “improvements.”

During my conversation with the City Engineer, I also asked if there were plans to add dedicated bike lanes up Park Avenue, since this was again another VERY wide street that would be safer if it intentionally accommodated bicyclists. (And Binghamton’s only bike shop is up Park Avenue.) He again said no. I asked if the City was at least going to restore the sharrows and he said, “there were no plans to do that, but I can look into it.”

As of November, there are still no sharrows. In other words, the street is more “incomplete” after the “improvements.”

It is important to acknowledge that some street investments over the last seven years have advanced the principles and standards of Complete Streets, such as the new pedestrian crossings along Main Street and ADA compliant cross-walks and curb cuts. But these projects were done with federal and state dollars that come with strict design mandates. On the other hand, where street improvements have been funded with local tax dollars, the administration has fallen short time and time again, and in violation of the local policy approved by City Council back in 2011.

This is a problem that needs a fix, and a simple fix is possible.

City Council should pass legislation requiring the City Engineering Department to issue to City Council and the public an Annual “Complete Streets” Report that summarizes how locally-funded street investments are, in fact, advancing the goal of Complete Streets. In this report, perhaps due in December, the City Engineer’s Office would list all street improvements made that year, and what interventions were made, and where, to increase the safety of all users. For example, the report could explain not only how many miles of streets have been repaved or improved, but also how many miles of streets have new dedicated bike lanes or bike sharrows, providing an easy metric for folks to assess whether the current administration and future administrations are successfully prioritizing the safety of all users and users of all abilities.

Binghamton’s passage of its Complete Street Policy in 2011 was a model for the County and the rest of the state. Binghamton has the chance again to show leadership in mandating an Annual Report that will hold any administration accountable in meeting that policy, and ensuring street investments funded by local tax dollars enhance safety for all users.

For a GOP-led Council (and GOP administration) that seems so focused on “public safety,” this would seem like a no-brainer.

But I won’t hold my breath.

Question to the readers: Anybody else see street improvement projects that have eliminated or failed to add bike lanes (or sharrows), in violation of the City’s Complete Streets Policy? Let me know at modocpress@yahoo.com.