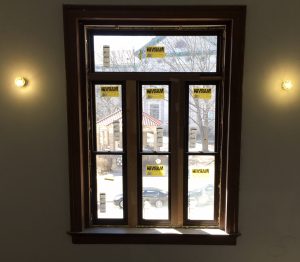 View of Courthouse through new windows in front entry way. 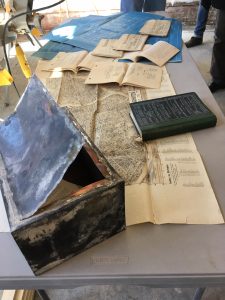 Contents of time capsule with box that was soldered shut.

The Preservation Society of the Southern Tier (PAST) conducted hardhat tours of the renovation of the Carnegie Library which will become the home of a new Culinary Arts Institute of SUNY Broome. The construction uncovered a time capsule with the only existing blueprints, newspaper articles, various official papers, and a letter from Andrew Carnegie offering $75,000 to build the library. That turned out to be more than enough to build the library in 1903.

Mahogany trimmed windows, plaster crown molding, and floors are being refurbished and new windows installed. A later addition to the library (which held the stacks) was torn down due to poor construction and a new wing is being built to house two commercial kitchens, an elevator, and other spaces. The basement which previously housed archives and microfilm readers will become a beverage lab, and offices.

The Carnegie building had been sold to a downstate developer and has sat empty for more than 16 years. Broome County took the unusual step of using eminent domain to recover the building and offered it to SUNY Broome for its use. W.H. Lane Construction is doing the renovation which is expected to be done in January 2020.

Roger Luther of PAST, and local historian and photographer explaining the history of the building

PAST is active in highlighting local historical sites and campaigning to preserve threatened buildings. They also sponsor house and garden tours, a Halloween “Spirit of Binghamton” tour and run a Salvage and Antique store on first, third, and fifth Saturdays 9-1 at their office on N. Depot St.

The original letter from Andrew Carnegie offering $75,000 to build a library.