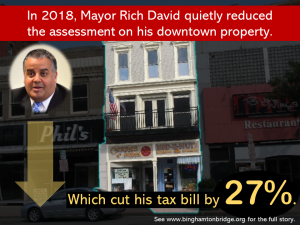 On February 5, I published an article on the bridge explaining how Mayor Rich David quietly and questionably secured a nearly 30% reduction of his downtown property tax bill. Mayor Rich David is now saving thousands in local property taxes because, in 2018, the City Assessor—a position the Mayor oversees and appoints—used a questionable “informal review” process to personally approve a nearly 30% reduction of the property’s assessment, upon request by the Mayor.

It turns out that wasn’t the only sweetheart deal that Mayor Rich David has extracted from the Assessor.

Public records show that Mayor Rich David has also been benefiting from an illegal STAR exemption since 2014, the first year he took office. The illegal exemption nets Mayor Rich David personal savings of approximately $1,000 a year.

Why was the exemption illegal? According to the STAR Assessor Guide, and confirmed by local real estate lawyers, a property that is owned by a limited liability corporation (LLC) is prohibited from using the exemption.

Answer: If the property is not a farm dwelling, no property owned by a corporation, partnership or limited liability company may receive the exemption…” [emphasis mine]

Mayor Rich David has owned his property at 45 Court Street since 2006, but he deeded his property to his own LLC, Confluence LLC, in 2007 (see documentation below). That’s why the exemption is illegal.

But notice when the STAR exemption started. Is it just an odd coincidence that Rich David waited more than seven years, until 2014—the first year he was Mayor, and the first year with power and influence over the Assessor—to apply for this illegal STAR exemption through the local Assessor’s Office?

Well, given this is now the second conclusive example in which Mayor Rich David has used his influence over the Assessor for personal financial gain, I wouldn’t call that a coincidence. I’d call that a pattern.

It’s time for City Council to launch a comprehensive, bipartisan review of Rich David’s use of the power of the Mayor’s Office to slash his property tax bill by thousands through unethical and illegal conduct.

And it’s high time for our local media outlets to end the blackout, and finally report on what appears to be a serious pattern of misconduct by Mayor Rich David.

Image 1. The image below is from Broome Real Property’s online Parcel Database (IMO Broome County). It shows the history of sales of the property at 45 Court Street. As you can see, Rich David purchased the property at 45 Court Street on 8/29/2006. He then created a limited liability corporation in his name, Confluence LLC, and deeded the title to his LLC on 12/10/2007. After the assessment story broke, it appears he deeded the property back to his individual name on 2/28/2019, and I’m guessing that’s because he worried the attention might uncover his illegal exemption. 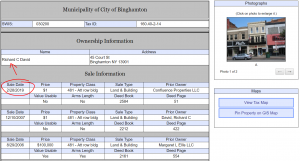 Image 2. This image is also from IMO Broome County. It confirms that the BASIC STAR exemption started in 2014, the first year Rich David assumed the Mayor’s Office (and all the powers that go with it).

Image 3. This image is from Broome’s public online portal of all property tax records, current and historical, for any property in Broome. This is a snapshot of Mayor Rich David’s school tax bill for 45 Court Street, which shows a STAR savings of $969.00 in 2018.