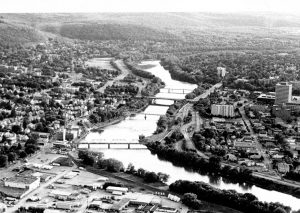 According to a review of city documents by The Bridge, owners of flood-damaged, substandard rental properties in a neighborhood with 62% of residents living at or below poverty (Census, 2013-2017 ACS), received FEMA Buyout payments far in excess of fair market values.

In one case, 20 Carroll Street, the FEMA Buyout payment was four times the property’s fair market value, as indicated by local assessment data.

A simple review of the historical sale prices of these properties suggest that buyers would have been extremely lucky to receive Buyout payments at or near the listed fair market value (FMV). That the Buyout payments of the above properties were two to four times the FMV seems highly questionable–and a reckless waste of our tax dollars.

In fact, it’s even worse than it appears. Both 17 and 25 Tudor were taken in 2012 by Broome County for nonpayment of local property taxes, and then auctioned off together. The winning bidder picked up both rental properties for just $5,200.

While FEMA ultimately approved the payments, the responsibility for administration and management of the FEMA Buyout program was with the City of Binghamton’s Economic Development Office (BEDO).

In order to determine the appraised value of the properties, BEDO hired an appraisal firm from New Jersey, PATJO Appraisal Services, to complete the appraisals for a flat fee of $1,300 per property.

A review of the appraisals, obtained from the City through a FOIL request, show shoddy work and inaccurate information. For example:

I’m not an expert in “professional appraisal methodology,” but I know enough about our housing markets in the region, city and this neighborhood to know these appraisal reports are junk and worthless.

It’s irresponsible and inexcusable that BEDO deemed these documents acceptable, and then signed-off on significantly inflated purchase prices. BEDO should have done a much better job of managing this FEMA grant and our tax dollars.

But now I understand why the tenants of these buyout properties–all of whom were poor and some of whom had special mental and physical needs–had such a hard time obtaining relocation assistance from BEDO last summer. With so much of the FEMA grant money going to inflated buyout offers, the BEDO staff had little choice but to nickle and dime the vulnerable tenants who were displaced by the program.

Or, maybe the reason is simpler: under this Republican administration, well-connected real estate developers and landlords will always win out over struggling taxpayers and vulnerable tenants.