Each year, the City of Binghamton receives approximately $2 million from HUD through the Community Development Block Grant program, consistently ranked by Republican and Democratic mayors across the country as one of the most important funding sources to support investments in distressed neighborhoods, local housing needs, and nonprofits delivering essential services to our most vulnerable populations.

Binghamton is one of approximately 1,200 cities that receive direct CDBG awards from HUD, and the program allows local leaders a great deal of flexibility in how to invest these dollars in line with the program’s three primary objectives: (1) benefit low-to-moderate income individuals; (2) blight prevention and elimination; and (3) meet an urgent need that poses serious and immediate threat to the health and safety of residents.

In Binghamton, there has been little change over the years in how CDBG dollars are used. Some of the primary activities that are funded year-over-year include:

These are, in many ways, essential services and investments that the local taxpayer would have to fund in order to provide critical investments to distressed neighborhoods and the people who live there. If the program were to be eliminated–and incredibly, the Trump administration has proposed doing that two budget cycles in a row now–the City of Binghamton would have to raise local taxes about 7% to annually cover these services and investments.

And while HUD requires communities who receive direct CDBG grants to actively seek community input during the budget process, the City of Binghamton hardly ever receives citizen interest and feedback on how to spend these flexible federal dollars.

I don’t suspect that will change soon, but for those who may be interested, there is a final public hearing on the City’s proposed CDBG budget for the 2020 calendar year. The hearing is scheduled for Monday, May 6, at 6:30pm in the City Council Chambers. I’d link to a press release or a page on the City’s website announcing the public hearing, but none exists.

For convenience of Bridge readers, I pulled together a summary of the proposed CDBG budget:

Below, I offer some of my own thoughts on the proposed budget, but first I need to comment briefly on Washington’s shameful and reckless spending decisions.

THE SHAME OF WASHINGTON: LOAVES AND LOAVES TO WAR, and CRUMBS FOR OUR NEIGHBORHOODS

Increasing funding for the CDBG program is consistently a top-five legislative priority for the US Conference of Mayors, a national bipartisan coalition of mayors from red and blue communities. After all, mayors know best how this program plays a vital role in meeting the needs of those less fortunate and supporting investment strategies in distressed neighborhoods. And with housing affordability, pervasive blight, and systemic poverty common features across so many communities–from coal mining towns in West Virginia and rust belt cities across the northeast to communities in the Black Belt and Appalachian region–it would seem only logical and moral to boost CDBG funding, a block grant program that gives local decision-makers control and discretion over how best to meet the needs of their neighborhoods and people.

To put this in perspective, we spent approximately $8 billion a MONTH for 100 consecutive months to fund the illegal, tragic war in Iraq.

Moreover, the federal government used to fund this program at much higher rates compared to today. As the graph below depicts, when adjusted to 2016 dollars, Washington committed $15 billion to CDBG in 1979 at the high-water mark of the program’s history. 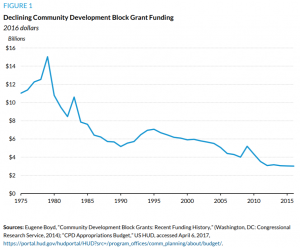 Imagine if $15 billion (just under what we spent every two months on the Iraq War) was committed to the CDBG program. More than 1,200 communities would receive a massive infusion of resources to improve distressed neighborhoods, address housing needs, and adequately meet the needs of those most vulnerable in our communities.

For Binghamton, that would mean we could be discussing how to invest not just $2 million, but $10 million. Consider:

I don’t think there’d be one Republican or Democratic Mayor who would “reject” increasing CDBG funding five-fold. And for those who say increasing the program from $3 billion to $15 billion is fiscally reckless, remember that Democrats and Republicans joined together to increase military spending in the 2019 budget to $719 billion, which is an $82 billion increase from the prior year and more than President Trump and the Pentagon requested.

And this comes on the heels of the first ever audit of the Pentagon, which failed miserably (“Pentagon can’t account for $125 billion over a five year period”). The award-winning investigative journalist Matt Taibbi from Rolling Stone has a great “intro” article for those who want to put our defense spending in context of our paltry, almost pathetic $3 billion for CDBG.

MY THOUGHTS ON THE CITY’S BUDGET

Since both Washington Democrats and Republicans are complicit in shoveling cash into the belly of the Pentagon, it’s unlikely that, without a political revolution, the CDBG program will see any sudden spike in funding. So, it’s important to look at every dollar spent locally, and ask if it’s strategic and meeting the program’s objectives.

Here are a few changes I will share with the City via writing, since I will not be in town for the May 6 public hearing (feel free to borrow any of these if you plan to show up or submit written comments):

The CDBG program is perhaps the most impactful federal funding when it comes to addressing the health and livability of Binghamton’s neighborhoods. Unfortunately, it is also either largely misunderstood or completely unknown. I hope this has shed some light on the program, but please don’t hesitate to reach out to me at modocpress@yahoo.com if you have any questions about this grant and the process.