Got a grievance about abuse today? Tomorrow? Ever? Not in the BC jail you don’t! 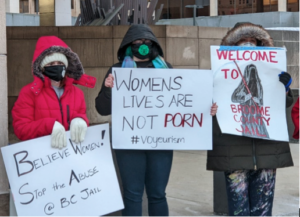 Friends and family of persons incarcerated in the Broome County jail regularly hear disturbing accounts of physical, disability, and medical abuse. The official county, state, and legal recourse for incarcerated persons is for them to file a grievance. That has proven very difficult. Often persons report they are denied a grievance slip, which eliminates a paper trail for any later legal action, and if they manage to file a grievance, it is denied by jail authorities. Reports of retribution for filing grievances are common. In 2019 Judy Arnold detailed the impossibilities of filing grievances in an article in the community newspaper the Binghamton Bridge. More recent lawsuits, evidence, and public testimonies amplify the charge of an unaccountable system of abuse.

And statewide? Below is a table of spot checks of recent SCOC annual reports and spot checks of monthly reports. As you can see, the rejection rate of county jail grievances that make it to the SCOC has risen from the already remarkable rate of 95% to 99% currently.

Mandated SCOC inspection reports of the BC jail obtained by freedom-of-information requests do however reveal that grievance and disciplinary procedures in Broome County are riddled with irregularities in violation of state regulations. A 2016 review shows for example that reviews of grievance records and records of the use of force and chemical agents were incomplete, inconsistent with investigations, and lacked interviews (SCOC, March 2016, pp. 3, 5, 6).

Nor were many violent events reported. The inspection team found for example that reportable incidents (injury, death, emergency, disturbance) and discipline reports demonstrated that “staff are not consistently documenting significant events that occur,” and a “review of discipline hearing documentation indicated that hearing officers are not consistently documenting the evidence relied upon to reach a finding and how that evidence supports the finding” (SCOC, March 2016, pp. 3, 4)

Other state authorities report these failures at the level of the SCOC itself. Writing in anticipation of a lawsuit filed against the jail, the local Press and Sun-Bulletin newspaper reported the following on a NYS comptroller investigation:

“Though it received thousands of inmate grievances between 2014 and 2016, the state Commission of Correction (SCOC) didn’t analyze or track the grievances, and as a result, wasn’t able to identify trends at certain facilities or throughout the system, the audit says.

The result? Only costly and thus rare lawsuits bring cases of abuse to light, as shown by the county losing its own record of successive wrongful death and physical, medical, and disability abuse cases. Cases related to the abuse of youth are particularly grievous, as in the 2018 case the Sheriff and County lost. As one expert witness testified,

“All the juveniles spoke of the harsh and abusive practices [of] the Correctional Officers (COs) with many identifying in exquisite detail the beatings they endured at the hands of the COs’…. [a] youth spoke of an incident in which he was restrained in a restraint chair and then pepper sprayed while he was restrained. Still another youth spoke of the COs carrying batons they used to beat the kids; they reported that the COs refer to the baton as their “n-word  [sic] beaters.”

This pattern repeats itself. Last year another lawsuit was filed on behalf of another young man revealing the continuation of brutal and racial abuse in the jail, while a new $5 million wrongful death lawsuit was filed.

The inescapable conclusion: local oversight and reforms to the SCOC? They have failed us.

Disciplinary Records Reform to the Rescue? Rolling the 50-a statute back and forth

Might other avenues and records assist in responding to pleas from the hidden corners of the Broome County Jail?

In June 2020 the State Legislature, under pressure from several years of public protest over police misconduct and endangered Black lives, repealed the 50-a statute that shielded police disciplinary records from any public scrutiny. The repeal also opened up records on correctional officers in county jails.

Sheriffs, police chiefs, and officers’ unions immediately deployed, as reported in local media, an array of strategies to delay and forestall opening any records on officers’ misconduct. By late 2021 however they the largely lost the legal battle. USA Today then launched an effort to construct a statewide database through FOIL requests—but ran aground as requests were rejected, leading to lawsuits targeted county by county. Broome County was not one they chose to sue. 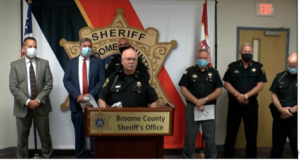 As elsewhere, the Broome Sheriff and County vigorously stymied all FOIL requests for disciplinary records. In media events the Sheriff, supported by a phalanx of Sheriffs from surrounding counties, proudly stated he doesn’t have time to compile the records and will not do so. Said Harder, “50-a? what a ridiculous thing that is… we don’t have time to do this stuff for people who are just nosey…

Harder’s final solution is simple: he denies there are any records that might cover any of the numerous allegations of abuse, including charges of the official discipline and demotion of officers for sexual relations with the incarcerated, repeated beatings by several handfuls of identifiable officers, firings for drinking on the job, and so on. His and the county’s response to freedom-of-information requests on general or individual disciplinary records is simple: no such records exists.

More than the abuse of the incarcerated is involved. Might disciplinary records of past as well as current officers come to light—most notably the current State Senator and former Broome County undersheriff Frederick Akshar? As widely reported in the press, he was involved in the investigation of a 2009 crash where his then girlfriend and Sheriff’s Deputy, Kathleen Newcomb, intervened on behalf of her “highly intoxicated” nephew. Reports by the County District Attorney were turned over to the Sheriff’s office at the conclusion of the investigation. Senator Akshar is currently running for County Sheriff in the next election as a Republican, while his Democratic opponent is Captain Newcomb.

It gets worse. This week at Governor Hochul’s behest a repeal of the 50-a reform is being proposed. It would allow police and sheriff agencies to deny access to records if they, rather than a judge, declare the officers are involved in ongoing investigations. The record of the police policing themselves is dubious. More realistically, Broome County has repeatedly used the rationale of an “ongoing investigation” to deny access to official records. That Hochul and others present this change as a ‘minor technical correction’ is not just shameful, it’s fantastical.

Take for example FOIL requests for records of deaths in the jail: access to records on years-old deaths have been denied, and justified by an “ongoing investigation.”

Similarly, as the local press has reported, state mandated reports on the jail’s private medical care provider, Correction Medical Care, were withheld in 2017 due to the Attorney General claiming that the disclosure would “interfere with law enforcement investigations or judicial proceedings.” This occurred despite the fact that these reports were required as a condition of the state’s 2014 settlement with CMC for medical malfeasance.

As Hochul’s changes go forward this month, supported by both Republicans and Democrats, all sheriff and police agencies need do is to claim “ongoing investigations.”

There is only one conclusion. We cannot rely upon the County, the SCOC, or the Governor’s office to protect individuals made invisible in county jails. Their actions to date have served to cover up inhuman conditions, injury and death.

Bill Martin is a founding member of Justice and the Unity for the Southern Tier, and Professor Emeritus, State University of New York at Binghamton. They blog at:  www.justtalk.blog