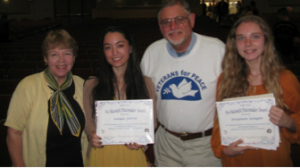 Joyce Thomas of the Quaker Meeting, Kayla Ferris, John Patterson of Veterans for Peace, and Breanen Rought, at the Chenango Valley awards ceremony on June 10, 2019.

Veterans for Peace and the Binghamton Community Friends Meeting (Quaker) presented $350 Stu Naismith Peacemaker Awards to four graduating high school seniors, two at Chenango Valley and two at Chenango Forks High Schools. Kayla Ferris, Breanen Rought, Lindsey Russell, and Samuel Forker received the awards, which have been given annually in memory of Stu Naismith (1927-2011), who served in the Navy in World War II, taught in both school districts, and was a founder of the local chapter of Veterans for Peace. The students earned the awards by working for peace in everyday life, preparing for further education, and writing an essay on peacemaking.