The following is the official press release issued on October 30 by Binghamton City Councilmembers Dan Livingston and Conrad Taylor, both of whom have expressed strong opposition to Mayor David’s proposal to privatize operations and management at the joint sewage treatment plant.

Binghamton Councilmembers Dan Livingston and Conrad Taylor spoke today, and for months at City Council meetings, about their frustration with the lack of information from the Republicans about their plan to privatize the operations at the joint sewage treatment plant. The two elected officials jointly call on Mayor David to immediately disclose to the public three pieces of critical information:

The Councilmembers note that nothing they are requesting is proprietary or confidential, and thus there is no legitimate reason from keeping this information from the public.

“From the start of this process, the Mayor has purposefully kept the public in the dark about his privatization plan,” said Dan Livingston. “From the unethical $140,000 payment to a consultant to produce a report that doesn’t exist to the costly impacts this plan has had on plant staff and operations, Again and again, the public and some Council members have been locked out of the process and denied information. I call on Republicans in City Hall to take this request for information seriously, and release it to the public immediately.”

Councilmembers explained that little information has been shared with the public since the bids were opened more than four months ago, on June 24. The bids went to a seven-member Selection Committee, which was comprised of all political allies or appointees of Republican Mayor Rich David or JC Republican Mayor Greg Deemie. No elected Democrat has been allowed to participate in the review and selection of the bids from private firms, and no information has been shared about the Selection Committee’s decision.

Conrad Taylor added, “The Mayor said the firm would be announced in September and presented to City Council. Well, most of us on Council know absolutely nothing about the winning bidder and the terms, and it’s incredibly frustrating. Who did the selection committee pick, and why? Is it a five-year or twenty-year contract? How much will the contract cost? Will the current city workers be absorbed and their benefits protected?”

The Councilmen are concerned that the Republicans have purposefully slowed the process so the issue isn’t on voters’ minds when they go to the polls this election season for City Council candidates. Both Democrats are strongly opposed to the Mayor’s privatization plan, but the Republicans remain open to it.

“Based on feedback from my constituents, I’d say 95% are opposed to privatization, and that’s been pretty consistent across the whole city, according to my colleagues,” said Livingston. “Nobody supports this plan. There’s a reason it’s suddenly being delayed until after Election Day. It’s also an affront to the hardworking public employees who have run this plant effectively and creatively from one disaster to the next. If the Republicans think it’s a great plan, why are they keeping it so quiet?”

Conrad Taylor made a final point about how this situation is impacting operations and staffing at the plant. “This is a critical time for the plant, and we need all-hands-on-deck to make sure the plant is running efficiently, and to identify and address design or construction flaws. Right now, there are nine unfilled staff positions at the plant that will be incredibly difficult to fill: who wants to test into and apply for a job that might disappear in the next couple of months? The Republicans need to disclose this critical information now, without delay.” 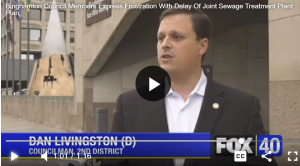