Last week on the radio, Mayor David went full-on Trump, calling the entire slate of Council Democratic candidates police-hating “agitators, protesters, and obstructionists,” and that I’m the radical extremist behind the curtains pulling all the strings. I didn’t hear the original rant, but when folks told me of the Mayor’s comments, I was both shocked at the absurdity and pleased by the Mayor’s apparent desperation.

Then, this Friday, just a few days before Election Day, a negative mailer, sent by the Broome County Republican Committee (Bijoy Datta Inc.), featured me more than the candidate. The smear piece accused me of hand-picking the candidate, again called me an extremist, and even included my home address prominently displayed on the front of the mailer.

Within 24 hours of that “Abdelazim extremist” mailer, a dead cat somehow made it to my front lawn. Maybe it’s just a coincidence, but I’ve never found a large, dead animal on my lawn before.

And it devastated my son, who saw it first. We scooped it up this morning (photo below), and plan to give it a proper burial tomorrow deep in our backyard. I told my son the cat was probably old, and had a heart attack. He still broke down sobbing for 15 minutes. 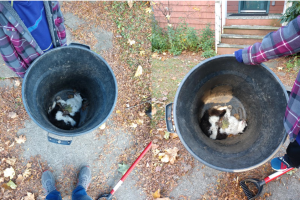 This is the rot of the Broome Republican Machine.

Like the national GOP, the Broome Republican Machine has no soul, no bank of ideas. It doesn’t even care for democracy. All it values is FEAR and HATE, and the only goal is to WIN.

But this Trump brand of GOP politics, alive and well here in Broome, is a dangerous dead-end that deepens division and entices violence.

I’ve been attacked many times before, largely because of my name (“Tarik Al-Qaeda-zim” was a 2012-2014 classic). I’ve even received emails from folks as far as Oklahoma and Florida calling me an ISIS sympathizer–all because of the fearful and hateful smears against me by the Broome Republican Machine that metastasize online. For Bijoy Datta and Rich David, there are no values, no principles, no ideas. Just a toxic stew of FEAR and HATE to bring home the WIN.

But like Trump, the coordinated actions by Mayor David and Bijoy Datta are crossing the line, bordering on incitement.

I’m a life-long city resident and friend to many. I’m also a son, brother, father, and co-parent to a wonderful mother. These partisan bullies have now compromised my sense of security.

And to be clear, it’s not my sense of security for me. Rich David, Bijoy Datta, and their hate-filled army of Trump-o-philes don’t scare me. Folks know my resolve.

But my house is where I parent, and no parent involved in local politics should ever have to worry about their kid’s safety.

Today, this is the life of an engaged and progressive Democrat in Broome. And I’m not even a candidate. The same kind of baseless, hateful attacks have been waged on decent candidates across the County who pose a threat to the Broome Republican Machine.

I’m not the only one who’s extreme.

Residents demanding reforms to our criminal justice system are extreme.

Even current Republicans, like Michael Korchak (for challenging the Broome Republican Machine), was called “extremist” in a recent mailer.

This is the rot of the Broome Republican Machine–and there’s really only one way to fight it.

On Tuesday, send a message. Vote, but don’t cast a single vote for a Broome Republican.

All. Down. The Line.

We’re in the Endgame now, folks. Make it count.

For those who want to express their outrage with this “Abdelazim extremist” mailer or any of the many other mailers sent throughout Broome, call: