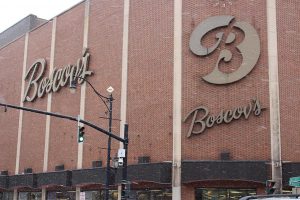 On April 13, 2018, Mayor Rich David issued an official city news release, announcing the City had entered into a one-year extension of lease, PILOT, and parking agreements with Boscovs Department Store. The release, available on the City’s website (and pictured below), stated, “A one-year extension of Boscov’s payment in lieu of taxes (PILOT) agreement was approved by the Binghamton Local Development Corporation (BLDC) on April 26. The extension agreement will be submitted to The Agency, Broome County IDA, for its approval…”

The only problem is that there never was an existing PILOT agreement.

According to a review of reports that the Broome County IDA must submit annually to the NYS Authorities Budget Office (ABO), a PILOT with Boscovs doesn’t exist. In fact, a review of annual reports from 2012 to 2017, in which every active PILOT  is listed with exquisite detail, the Boscovs Department Store (11 and 13 Court Street) is never mentioned once. To review the Broome County IDA’s annual reports, go to the ABO’s public portal here.

So why have so many city officials over the years, and now Mayor David, talked about a PILOT agreement that doesn’t exist?

I don’t know, which is why I raised this question, and others, to City Council members during the most recent legislative session (March 6, 2019). I raised these same questions the year prior, as well as in December 2018. Council members Chris Papastrat and Dani Cronce, who serve on the BLDC Board, stare at me every time in silence with glazed looks.

In addition to the smoke and mirrors over this PILOT agreement, there is similar confusion and deception over the actual owner of this property.

Mayor Rich David continues to say to local reporters that the building is owned by Broome County IDA.

That also is not true.

While the real property data lists the Broome County IDA as the owner name (and why, that’s not clear), the owner mailing address is actually 4500 Perkiomen Avenue in Reading, PA. That’s the address for Boscovs Corporate Office Headquarters.

Snapshot of the owner information of the property at 13 Court Street, Boscovs Department Store, from Broome County IMO Real Property.

Moreover, a simple review of another annual report that the Broome County IDA is required by law to submit to NY State proves Mayor Rich David is wrong (or misleading). This specific report includes a listing of all properties owned by the IDA, and 13 Court Street, the Boscovs Department store, is not included. The report can be found here, and a screenshot of the report is included below.

Self-reporting by Broome County IDA to NY State of properties it owns. Boscovs is not included.

So if you’re following this–and I know it’s a little confusing–we currently have Mayor Rich David talking about extending a PILOT that doesn’t exist on a property whose owner is unknown.

Baffled? Don’t worry, so am I.

And to be honest, I’ve been confused for years. In 2013, I served on the board of the Binghamton Local Development Corporation (BLDC), the City’s economic development authority, in my official capacity as Binghamton’s Director of Planning, Housing, and Community Development.

At that time, there was discussion of a 5-year extension with Boscovs of both the lease agreement and the PILOT agreement. I and other board members asked questions about the lease agreement, since that implied BLDC was the “building owner.”

After some research by the City’s Attorney Ken Frank (who continues in this position to this day), he finally provided an explanation, and here is my best recollection of the facts. Ken Frank explained that many years ago, under a prior administration, the BLDC joined with a real estate firm in Reading, PA to form a new entity, Bing Realty LLC, who took title to the Boscovs Department Store. The Reading firm dissolved, which left the BLDC as the lawful owner that the property would revert to once the PILOT with the IDA expired.

My questions about the PILOT were never adequately answered, so I was the lone board member not to support the five year extension. It’s not that I didn’t support Boscovs (I shop there all the time–I can’t afford Sall suits–and I knew at the time that having a retail anchor in downtown was important and valuable). It’s just that something seemed off, and questions lingered.

While it all still seems a bit unclear, I now have a guess of what happened.

The PILOT with the IDA likely expired long ago, but no administration has officially wanted responsibility for ownership of that store. Recall, if a PILOT doesn’t exist, then the store would revert back to the BLDC, but the BLDC is just an entity on paper that is largely run by the city administration (the Mayor is designated Board Chair, and multiple seats are assigned to the Mayor’s department heads and staff).

So my guess is that in 2013, the City attorney (who also serves as the BLDC attorney) and IDA attorney negotiated a clever agreement to keep up the facade of a PILOT. Put the Broome County IDA’s name on the title, but BLDC will retain all responsibility to negotiate a lease that includes a payment in par with an annual PILOT payment. Everybody just keep smiling.

The problem with that approach is that the rightful owner, the BLDC, could too easily avoid its maintenance responsibilities over the years. And that’s exactly why Mayor David claimed on WNBF during his regular radio interview in December, “the building is literally falling down and crumbling around the store.”

Now to be fair, that means the last Democratic administration also let repairs go by the wayside for years. But I don’t think the City/Board attorney every fully researched and explained to the BLDC Board that they were the actual owners until the extension came up in 2013. To the credit of that Board, included in the five-year extension was a requirement that Boscovs invest $1 million in urgent repairs, including the roof, and show expenditures of at least $30,000 annually in repairs and maintenance needs. That agreement was announced in December 2013, days before Mayor Ryan handed over the reins to Rich David.

It’d be very interesting to know if Boscovs ever complied with those terms. In the five-year extension, there was a requirement that Boscovs provide proof of the $1 million dollar repairs it had to make in 2014, as well as the required annual repairs for the remaining four years. The responsibility to monitor those investments was with BLDC, which become the responsibility of the incoming David administration.

Maybe Mayor David doesn’t want us to know the truth about that one either.

I know Mayor David too well. He’ll try to spin my commentary as an attack on Boscovs. Please. Nothing of the sort. I got a friggin Boscovs credit card.

As always, this is just me and my love for good governance. Call me old-fashioned, but I’m a big fan of the truth and transparency. I think facts and honesty matter, and it’s important for the Council members, BLDC Board members, IDA Board members, and the residents to fully understand what the hell is happening here before we trust some to negotiate on our behalf a solution that may involve millions in public tax dollars. Here are some suggestions to put us on proper footing.

This article was never meant to debate whether the investment of public dollars to fix the building is the right course of action, suggest the terms of a “good deal,” or argue if Boscovs is even the right tenant going forward.

That all comes later. This article was meant to highlight the need for first getting agreement on what the hell we’re talking about. And for that to happen, we will need a lot more honesty from this administration and its enabling partners.