Having worked at City Hall for almost eight years prior to the current administration, I remain friends or friendly with dozens of city employees: in the Police and Fire Departments, over at the “Rock” (our endearing term for the DPW facility), in every division of Public Works, and in Planning and Development. Often, I receive whispers of wrongdoing, or things I should check out. Mostly, I just shake my head in disappointment or disgust. Or I try to offer some feedback and advice, to help the person seek redress or achieve resolution with an issue.

However, the last “tip” from a City Hall insider turned up something that the public deserves to know. This is that story.

It was late July 2018, and the tip came in: “Check out assessments downtown. Start with David.”

I always smile at the presentation. Sometimes, long-winded rants in email or anonymous letters. Other times, brief phone calls. But the best are these coded transmissions, almost spy-like, delivered quickly when passing on the street or at the end of a courteous chat at a local restaurant.

A few nights later, I checked online to review the assessment on Rich David’s downtown property at 45 Court Street. Two doors down from the Metrocenter Courtyard, the Mayor’s mixed-use property accommodates two commercial tenants on the street level, and the top two floors serve as his primary residence.

I was surprised, for two reasons.

First, the downtown real estate market might be the only market in all of Broome County that’s booming. As evidence, just across the street, Mayor David made a windfall selling the Family Dollar building for twice what he paid for it seven years earlier. In 2010, he bought 60 Court Street for $655,000, and seven years later, he sold it for more than $1.2 million. 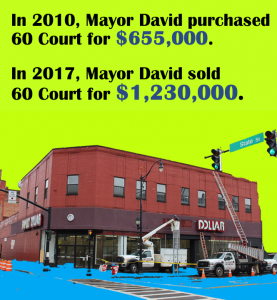 So lowering the assessment on his other property right across the street seemed to defy market realities and common sense.

Second, the Press and Sun Bulletin ran an article on April 4, 2017, a few months after the sale of the Family Dollar building, about the potential conflicts of interest for a mayor that holds real estate in the City. The article interviewed government ethicists who cited two key areas of concerns: (1) whether the City leased space from buildings the mayor owned; or (2) whether the assessments on the mayor’s properties were questionably reduced.

The reporter, Hanna Schwarz, did an independent review of the assessments on all of Mayor David’s properties and confirmed, at that time, that none had changed.

Yet one year later, after Mayor David’s re-election, the assessment on probably the most valuable piece of property in his real estate portfolio drops almost 30%.

“Something isn’t right,” I remember thinking. ‘This isn’t right at all.”

DOING MY DUE DILIGENCE

I wanted to be responsible with this information—and respect the trust the city staffer placed in me—so I did my due diligence. I talked to representatives at NYS Department of Taxation and Finance and the NYS Comptroller’s Office.

I was told that, under NYS Law, there are only two ways (absent litigation) a property owner can secure a reduced assessment:

Consistent with NYS Law, the City of Binghamton has a three-member BAR, which meets for two days in May to review and issue determinations on all grievance cases.

On August 6, I reached out to the Assessor’s Office, and under the Freedom of Information Law (FOIL), I requested a listing of  every applicant who had submitted an application or complaint to grieve their assessment between 2016 and 2018.

On August 13, I received an official email response from the City’s Law Office. Attached was a very detailed, 14-page spreadsheet of every grievance application and case in 2016, 2017, and 2018, including all the determinations made by BAR and all the stipulations negotiated by the Assessor.

I looked for Mayor David’s case, 45 Court Street, on the spreadsheet, but it wasn’t there. I double-checked and triple-checked. Nothing.

Maybe it was a clerical error. Or maybe his “case” was purposefully left off the spreadsheet.

I decided to FOIL (requested under the law) for the three city residents currently serving on the Board of Assessment Review (BAR). When I received the City’s response, I noticed a familiar name who is well-respected in the community. I phoned him up and asked for 15-minutes of his time (funny enough, I find his number in the phone book on my porch–the phone book!). He kindly obliged, and I met him at his house the following week.

I showed him a printout of the property file for 45 Court Street, which showed the assessment on Mayor David’s downtown property had dropped by 27%. I asked if an application from Mayor Rich David ever came before the board in 2018.

He quickly responded, “No, and I would have remembered.”

I asked if the Assessor had ever mentioned that Mayor Rich David submitted an application to grieve his assessment, and he again said no, and that he would have remembered. He was puzzled (and a little disturbed) by the facts, but I didn’t want to take up any more of his time. We exchanged pleasantries, I thanked him for his time, and I left.

If the case didn’t go before BAR, I reasoned, then Mayor David must have negotiated a “stipulation” with the Assessor. There was one more step I had to take as part of my due diligence.

The Assessor’s Office has an old-school manila folder for every property in the city. Every document pertaining to that property, going back decades, is in the folder: grievance applications and determinations; property inventory cards; exemption applications and more.

So I asked a friend to go in and review the documents in four folders: Mayor David’s property at 45 Court Street, and then three other properties, randomly selected, that were listed as “Stipulation” cases in the detailed spreadsheet sent to me via email by the City’s Law Office.

I wanted to compare the documents and see if all stipulations were presented and treated consistently.

My friend went in, reviewed folders (the staff in the Assessor’s Office were incredibly kind and courteous), and took photos of the documents in each folder. Here’s what we found:

The two couldn’t have been any more different: the stipulation cases that were included in the spreadsheet complied with NYS law, and Mayor David’s did not.

And even if the Assessor and Mayor David can somehow claim they didn’t need to fill out Real Property Form-524, then I can’t see how this “complaint” complied with local law, as described in the City of Binghamton’s Code of Ordinances. The process is outlined clearly in Section 375 (Taxation), Article II (Complaints Related to Assessments), and a one-page complaint form filled out by the Assessor himself with no supporting documentation provided by the property owner misses the boat by a mile.

One last point. According to the City Charter, the Assessor serves a six-year term and is appointed by the Mayor. The current Assessor’s term expires later this year, and will likely be looking to Mayor David for his blessing for another six year term. So there’s that.

UPSET? THEN DO SOMETHING.

That’s what I got, folks, and I leave it up to each and every one of you to do what you wish with this information.

For me? Well, I’m a taxpayer, and a big champion of good government. I believe in accountability, and rooting out abuse of power and unethical conduct in order to restore the trust between our democratic institutions and the citizenry.

So my hope is that many of you will read this and be just as upset and disappointed, and will join me in calling on the City Council to launch a bipartisan and transparent review of the actions and decisions of both Mayor David and the Assessor. If you’re a bit frustrated that Mayor David may have abused his power to secretly gave himself a 27% tax cut on his downtown property and residence, then please take a minute and call your local Council representative. The numbers and emails are provided below.

Thanks for reading this article, and for spreading the word.