– Come next summer, the sewer rates will be 35% higher than in January 2017, thanks to Mayor David –

According to his own statements and as reported by multiple local media outlets–including WNBF radio, the Press and Sun newspaper, and WBNG–Mayor Rich David promised no increases to the sewer rates.

But a simple review of the 2020 proposed budget shows that Mayor David is actually proposing an increase to the sewer rates for city residents and outside users. According to the Mayor’s budget, the rates are slated to increase May 2020 (see picture of budget page below). 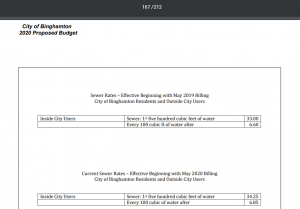 While the increase is minimal, it’s strange that the Mayor would purposefully deceive the public about the “no increase,” when he knows full well that his own budget does just the opposite. The local media ate it up, and Mayor David was probably betting they’ll “move on.”

But the Mayor’s charade made me wonder: How many times has the rate increased in the last four years?

A search of the Mayor’s official press releases turns up nothing. I couldn’t find any public notices of sewer rate increases.

Maybe sewer rate increases were included in the Mayor’s previous budgets, I thought. Might as well give it a shot.

It turns out that sewer rates have already been quietly increasing over the last few years. Rates jumped in 2017, and again in 2019, as shown below. So come May 2020, Mayor David will have increased sewer rates for city residents and outside users by 35% since January 2017. 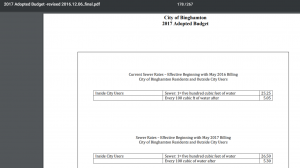 A screen capture of a page from the City of Binghamton’s Adopted 2017 Budget, showing an increase in sewer rates, effective May 2017.

A screen capture of a page from the City of Binghamton’s 2019 adopted budget, showing an increase in sewer rates effective May 2019.

None of this surprises me. I stopped counting the deceptive or blatantly false statements coming from our “esteemed” Mayor years ago. But maybe this time, the local press will circle back and hold Mayor David to account.

The public has a right to know.