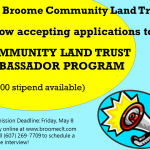 Earlier this week, a small coalition of housing justice advocates in Broome County announced a new paid opportunity for residents that are passionate about expanding safe, healthy, affordable housing choices in the area. The group, the Steering Committee of the emerging Broome Community Land Trust (CLT), is now seeking applications for its first-ever … END_OF_DOCUMENT_TOKEN_TO_BE_REPLACED 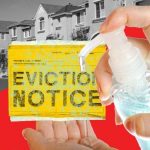 There is a coming crisis in the rental housing market, particularly among those tenants who are not receiving any public subsidy but who were, before the crisis, already financially insecure. Thanks to the 90-day eviction moratorium here in NY, which the Governor signed on May 20th, we have a little breathing room, but not much. We need to design, launch, … END_OF_DOCUMENT_TOKEN_TO_BE_REPLACED

Last week on the radio, Mayor David went full-on Trump, calling the entire slate of Council Democratic candidates police-hating "agitators, protesters, and obstructionists," and that I'm the radical extremist behind the curtains pulling all the strings. I didn't hear the original rant, but when folks told me of the Mayor's comments, I was both shocked at the … END_OF_DOCUMENT_TOKEN_TO_BE_REPLACED

The following is the official press release issued on October 30 by Binghamton City Councilmembers Dan Livingston and Conrad Taylor, both of whom have expressed strong opposition to Mayor David's proposal to privatize operations and management at the joint sewage treatment plant.   Binghamton Councilmembers Dan Livingston and Conrad Taylor spoke … END_OF_DOCUMENT_TOKEN_TO_BE_REPLACED

I was on the road the last two days for work, serving as a resource at a conference for local government employees from Republican and Democratic administrations across New York to help brainstorm effective strategies to transform vacant housing to neighborhood assets with a focus on equity, sustainability, and justice. My phone started lighting up … END_OF_DOCUMENT_TOKEN_TO_BE_REPLACED

Throughout the year, local reporting and community activism shined a spotlight on  a number of unethical and illegal actions taken by City Assessor Scott Snyder over the last few years that generated significant financial benefits for Mayor Rich David. Some of the local reporting even resulted in internal investigations by the City Attorney's Office, an … END_OF_DOCUMENT_TOKEN_TO_BE_REPLACED

The primary revenue source for the City of Binghamton--as with most local governments--comes from local property taxes. For example, in 2019, the City collected $35 million in local property taxes, which alone covered more than half of the $64.5 million general fund operating budget. [Yes. Worst intro ever. I know. But trust me: the research and graphics … END_OF_DOCUMENT_TOKEN_TO_BE_REPLACED

- Come next summer, the sewer rates will be 35% higher than in January 2017, thanks to Mayor David - According to his own statements and as reported by multiple local media outlets--including WNBF radio, the Press and Sun newspaper, and WBNG--Mayor Rich David promised no increases to the sewer rates. But a simple review of the 2020 proposed budget shows … END_OF_DOCUMENT_TOKEN_TO_BE_REPLACED

While the local newspaper and TV media outlets* have completely ignored the mounting evidence of improper actions between the City Assessor and Mayor Rich David, City Council members have been quietly continuing the conversation at business meetings and work meetings the last two months. In fact, at the April 15 work session meeting, there was unanimous … END_OF_DOCUMENT_TOKEN_TO_BE_REPLACED

According to a review of city documents by The Bridge, owners of flood-damaged, substandard rental properties in a neighborhood with 62% of residents living at or below poverty (Census, 2013-2017 ACS), received FEMA Buyout payments far in excess of fair market values. In one case, 20 Carroll Street, the FEMA Buyout payment was four times the property's … END_OF_DOCUMENT_TOKEN_TO_BE_REPLACED